The December 2021 protests are still fresh, when the “Chubutazo” groundswell stopped the Arcioni government in its attempt to impose industrial mining in the province of Chubut. Nevertheless, this week the government of Alberto Fernández is promoting the Navidad and the Cordón Esquel projects at the Prospector’s and Developers Association of Canada (PDAC) 2022 mining summit.

For 20 years now, Esquel has been saying “No” to the mine. We haven’t forgotten the referendum – nor the results. But each successive government keeps trying to make mining exploitation a reality.

Government officials have prepared a report to present to Canadian mining companies and the whole world to showcase the “Suyai” project (the name they have now given to the Esquel project to distance themselves from it and the significant opposition it has generated). This report sketches out a plan to turn Argentina into a mining country – especially the province of Chubut. The “new" Suyai project is being paraded as a case example in an effort to circumvent Law 5001. But those of us in Esquel and the province as a whole have already decided: No means NO! What part of NO do they not understand?

Over the 8-year lifespan of this mine, 2,300,000 ounces of gold and 3,500,000 ounces of silver will be extracted. That is only the start of the environmental and governance disasters that industrial mining brings. From the Assembly “No a la Mina Esquel,” we continue to underscore that we do not want to be a mining jurisdiction, we do not want pollution in exchange for a small handful of precarious jobs, and we do not want to lose the pure water we have today to satisfy the greed of a few. The government-produced video shows that gold is used for jewelry and capitalist accumulation. There are no medicinal or technological uses that justify the implementation of industrial mining in Esquel or Chubut.

This presentation is in line with many other actions the government has taken: particularly the Supreme Court’s ruling in favor of Yamana Gold against the Municipality of Esquel for the commercial authorization of the mining company's offices, or the prosecution’s acquittal of the Intelligence Agency’s against members of the Assembly.

As the Assembly, we repudiate the presence of Argentine government representatives in Canada this week, and any attempt to go against the will of the people of Chubut — whichever government it may be. We call on residents of Chubut to be on alert: The mountain is still standing thanks to its people. Today — just like 20 years ago —  we must continue defending it against this new onslaught of industrial mining companies. 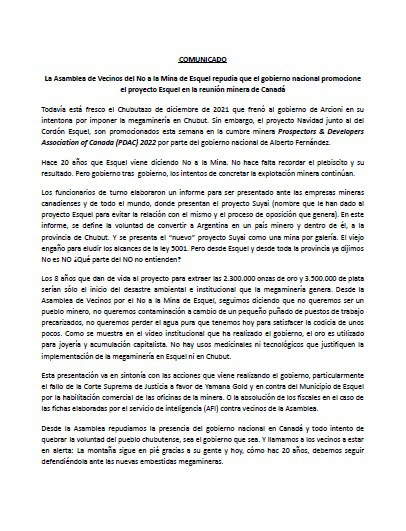 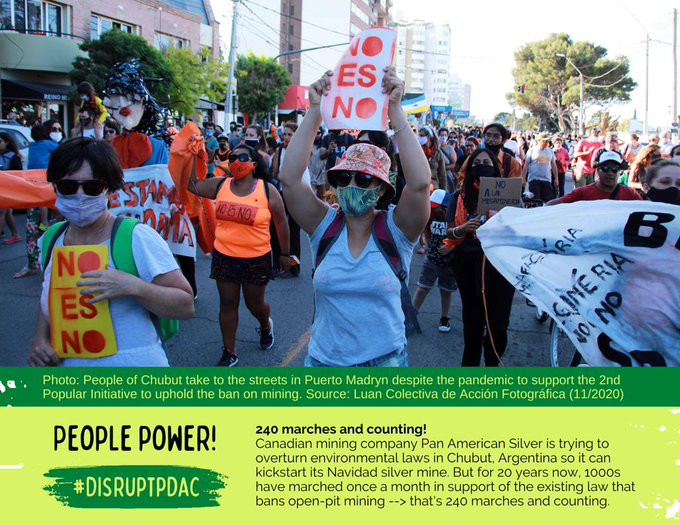