TORONTO/TKARONTO -- Representatives from communities impacted by mining projects in Colombia, Ecuador, Ethiopia, Nunavut, the Philippines, and the “Ring of Fire” region in Northern Ontario joined local activists to protest the opening of the world's largest mining convention.

Holding banners that said "Colonization Continues Through Canadian Mining" and "We can't mine our way out of the Climate Crisis", the crowd took Front street to disrupt and block the northern entrance of the Prospectors and Developers Association of Canada’s (PDAC) first in-person conference since 2020, which was held at the Metro Toronto Convention Centre.

Aliqa Illauq of Kangiqtugaapik (Clyde River), Nunavut addressed the crowd gathered, “My family was forced into the Canadian political system in the late 1950's early 1960's to ensure 'Canadian's would benefit from the resources from the Arctic.' Today, Inuit feel what that has meant. Animals are disappearing, waters poisoned, people taking their own lives, our language and ways of being disappearing. Inuit and all Indigenous peoples have been oppressed in the name of greed! We need to stop killing Mother Earth! Our children’s lives aren’t for sale! Our generations to come are depending on us to speak up."

The Shuar Arutam Government Council from the Ecuadorian Amazon sent a statement to condemn PDAC, which was read at the rally. Their statement explained that every year, Solaris Resources brings their paid Shuar personnel to speak wonders of a project that their people and legitimate community leaders reject.

"We condemn the company's ongoing strategy to manipulate our people, led by Federico Velasquez, who has even threatened to kill our president Josefina Tunki and those who support her. For this reason we denounce Federico Velasquez’s presence at PDAC, as well as in our territory," the statement read.

“We’re here today to condemn the extractive industry's attempts to greenwash its colonial and capitalist destruction, painting themselves as the solution to the climate crisis, despite being a major cause of it,” said Samantha Ponting, an organizer with the Mining Injustice Solidarity Network. “Their shiny PR materials can not erase the devastating harm that mining companies cause to communities and the environment all over the world, in order to serve their bottom line."

The Ford government recently reaffirmed their commitment to push through controversial mining projects in the Ring of Fire, featuring as one of their key election campaign pledges "a mining plan that will finally open up the Ring of Fire." Several First Nations in the area have raised serious concerns with the current regional assessment process, and three nations have declared a moratorium on development in the area.

“It’s so critical right now to have the people determine what’s going to happen, instead of a flawed system that seems to just want to rump shoot the whole process, and try to put the First Nations, the Anishinaabe people, to the side, to try to overwhelm them with technology or terminology that we don’t understand,” said Chief Wayne Moonias, Chief of Neskantaga First Nation.

“When we see mining moving into environmentally fragile regions like the James Bay lowlands it is up to both government and industry to fully respect the concerns of the people who have lived in these regions since time immemorial” said Charlie Angus, the Member of Parliament for Timmins - James Bay (Treaty 9).

In recent years, mining industry proponents have pointed to the significant amounts of metals and minerals that transition technologies like wind, solar, and electric batteries require. However critics have decried the federal government’s new supports for the mining industry, including the $2 billion in funding announced in the spring budget to increase the production of “critical minerals” needed for electric vehicles, highlighting that the mining industry and federal government are downplaying the devastating ecological impacts of the industry and its role in the climate crisis. Extraction and primary processing of metals and other minerals is responsible for 26 percent of global carbon emissions.

"We’re here to highlight that many of PDAC’s high profile presenters and sponsors are attempting to cash in on a green image while continuing to push projects forward that will have devastating environmental and climate impacts, and continue the colonization of Indigenous land,” said Ponting.

"We are here to call out Doug Ford’s plan to massively expand mining in northern Ontario’s ‘Ring of Fire’ without Indigenous community consent. We are calling out mining giants Ross Beaty and Andrew Forrest who insist they are leaders on climate change while pushing forward contentious projects in environmentally sensitive areas. We are calling out RBC, which claims to be ‘reimagining a sustainable future’ while investing in Coastal Gas Link, the Volta Grande project, and other projects synonymous with environmental damage and violations of free prior and informed consent," Ponting added.

In another region of Northern Ontario, members of Grassy Narrows First Nation have spoken out in opposition to strong mining interests on their territory. "Gold prospectors have staked thousands of claims in the area that my people have declared as an Indigenous protected area,” said Chrissy Isaacs, a grassroots land defender in Grassy Narrows First Nation. “As a mother, a grandmother, and a woman warrior I am sworn to protect the land so that we can heal together from the harm that colonial industry and government have done to us. Prospectors go home, you are not welcome on our land."

PDAC is the world’s largest mining convention and draws 25,000 people from resource extraction companies and their global network of funders, suppliers, and legal and diplomatic supporters.

Platinum PDAC sponsor Vale was ordered in 2021 to pay $7 billion to compensate victims of the 2019 Brumadinho spill, which killed 270 people and resulted in murder charges for company senior staffers. Sponsor Rio Tinto is facing massive public backlash in Australia after demolishing 46,000 year-old Indigenous sites in 2020.

“Gold Plus” sponsor RBC is a high-profile funder of the Coastal Gas Link pipeline, which is being violently forced through unceded Wet'suwet'en territory without consent from affected Indigenous communities.

"The mining industry is profiting off the climate crisis as it tries to paint unprecedented mineral extraction as somehow good for the planet," says Kirsten Francescone of MiningWatch Canada. "At PDAC 2022 and beyond, companies like Teck Resources, Yamana Gold, and Pan American Silver are being erroneously championed as 'green' leaders. But we need to call out PDAC for what it is: a space to greenwash an industry responsible for some of the worst environmental disasters in history." 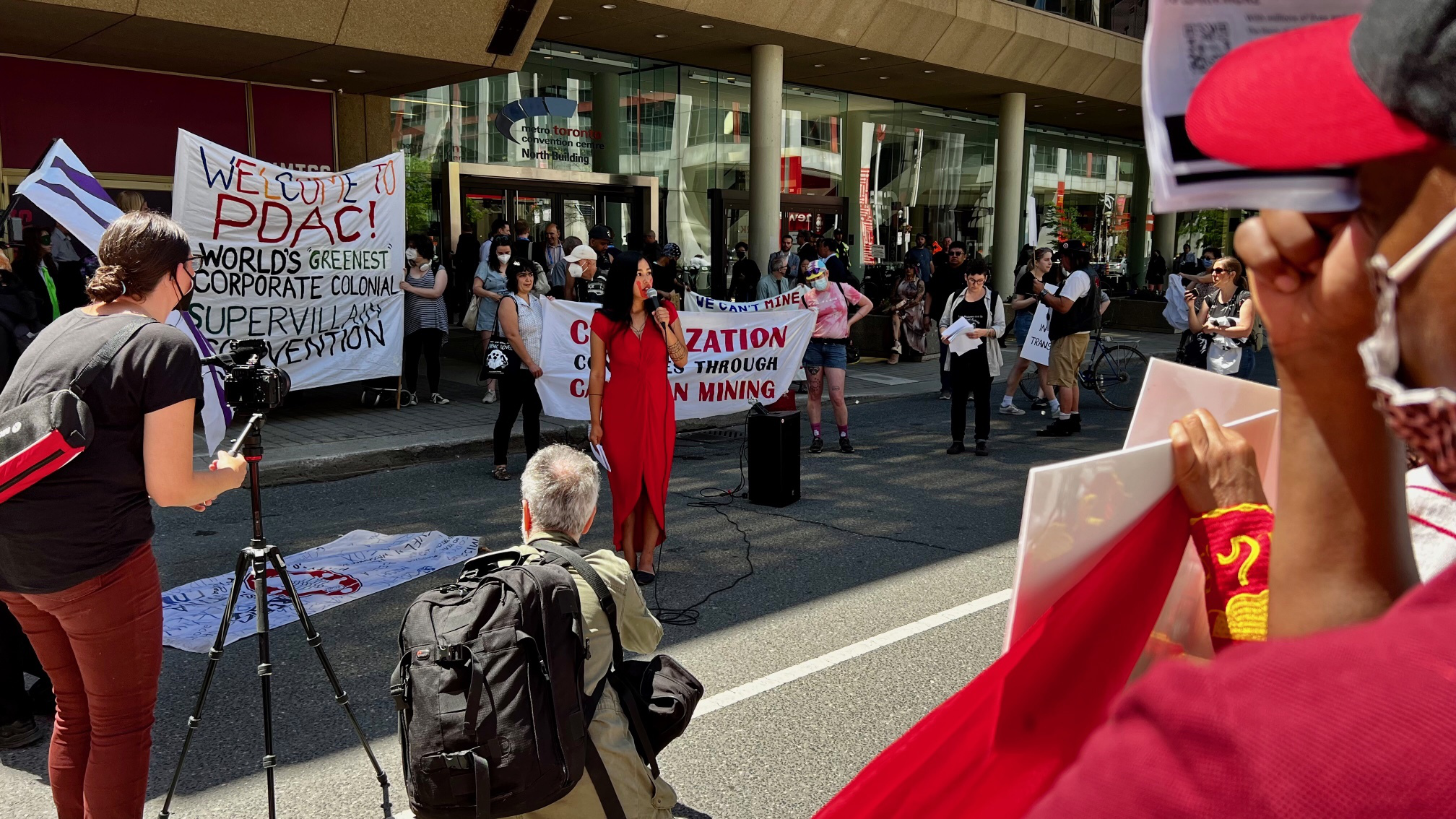 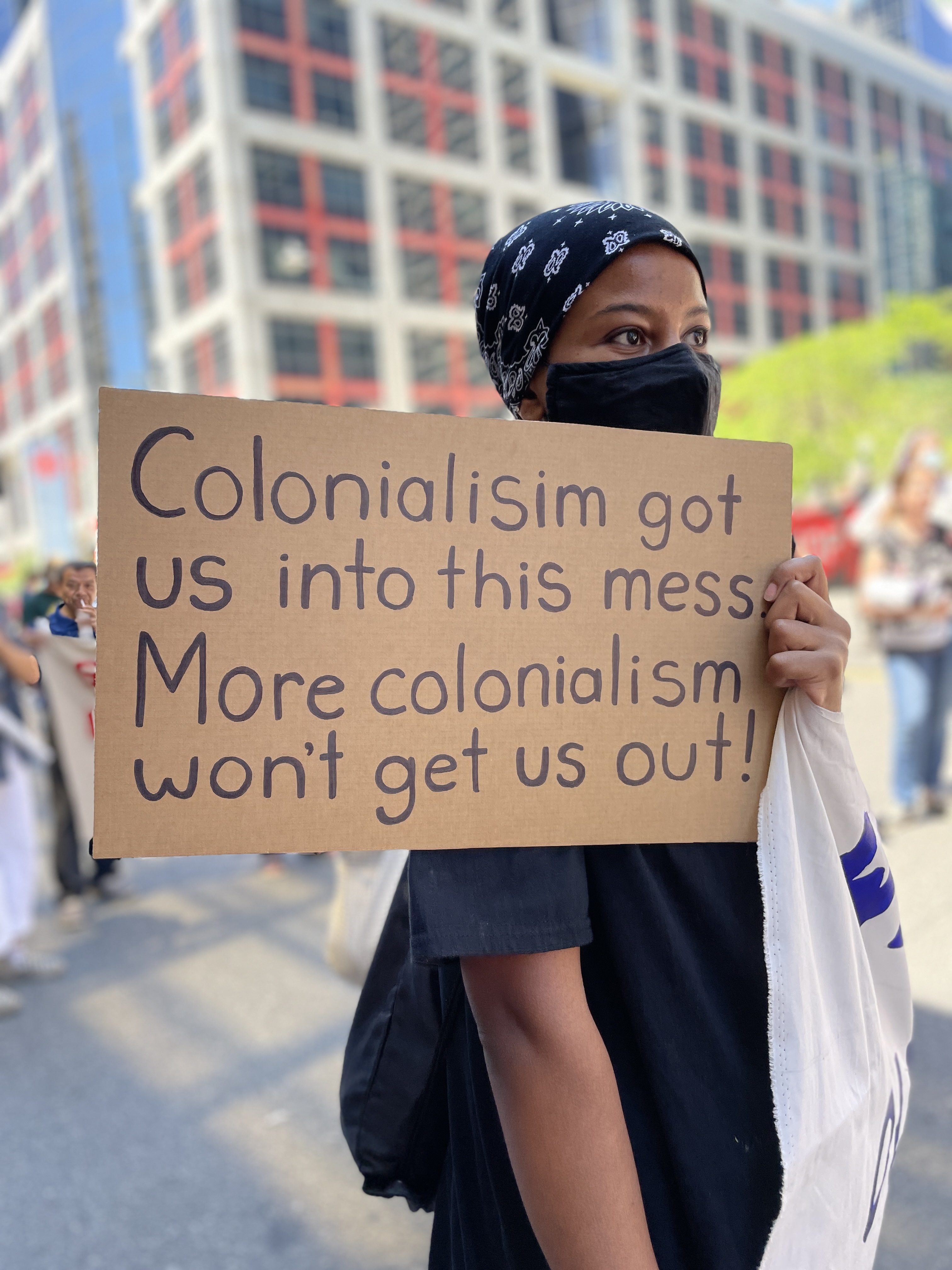 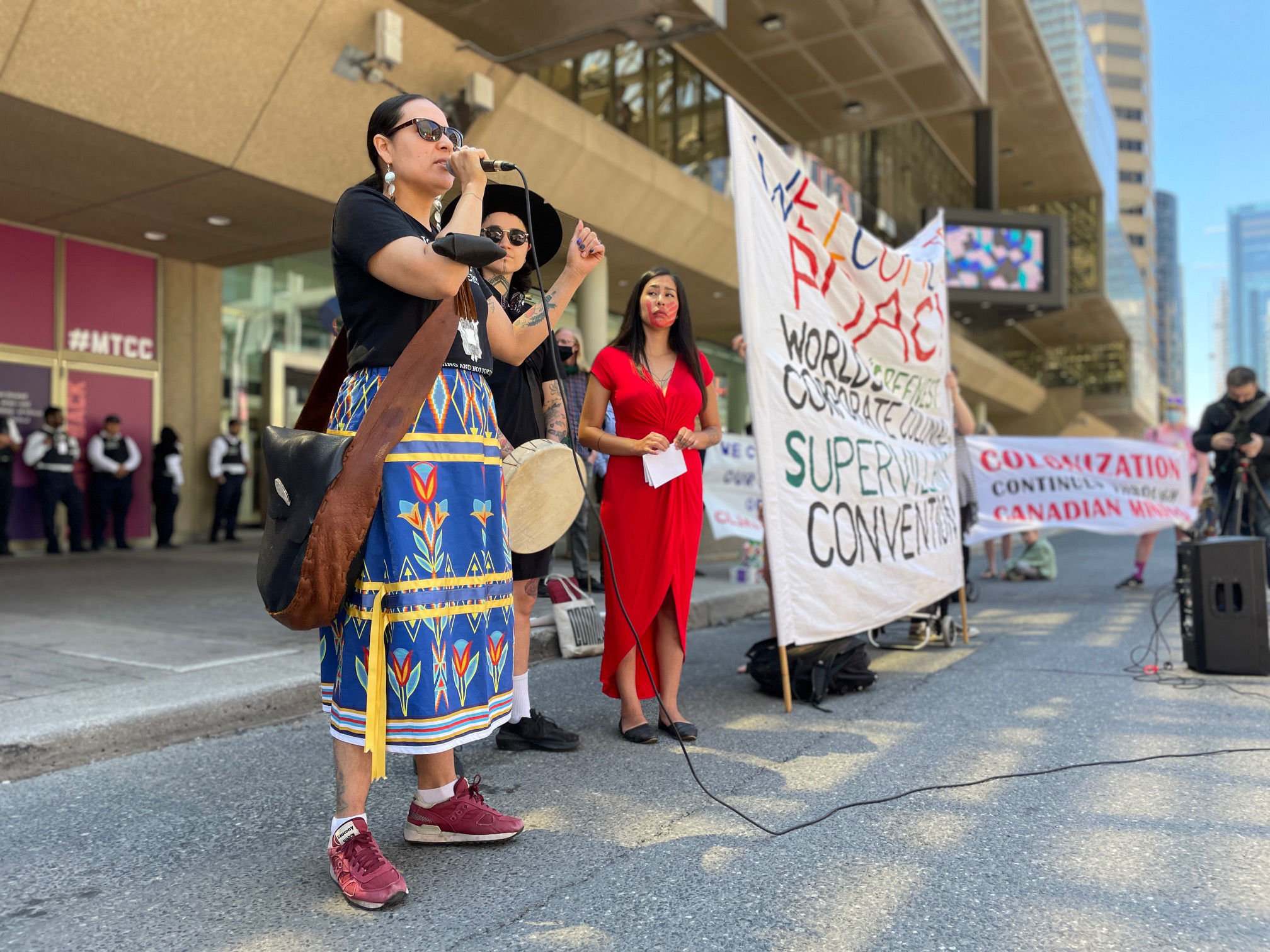 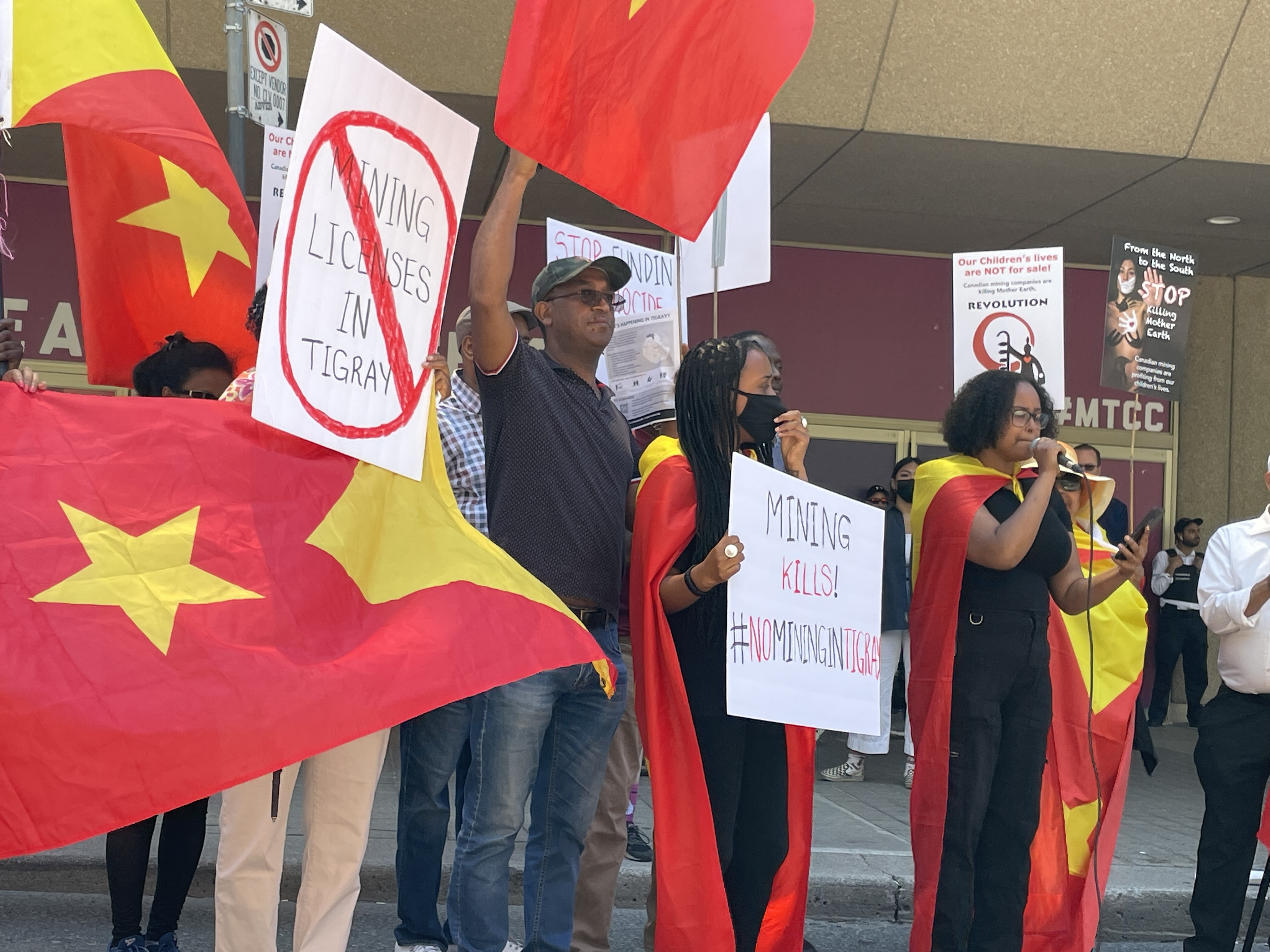