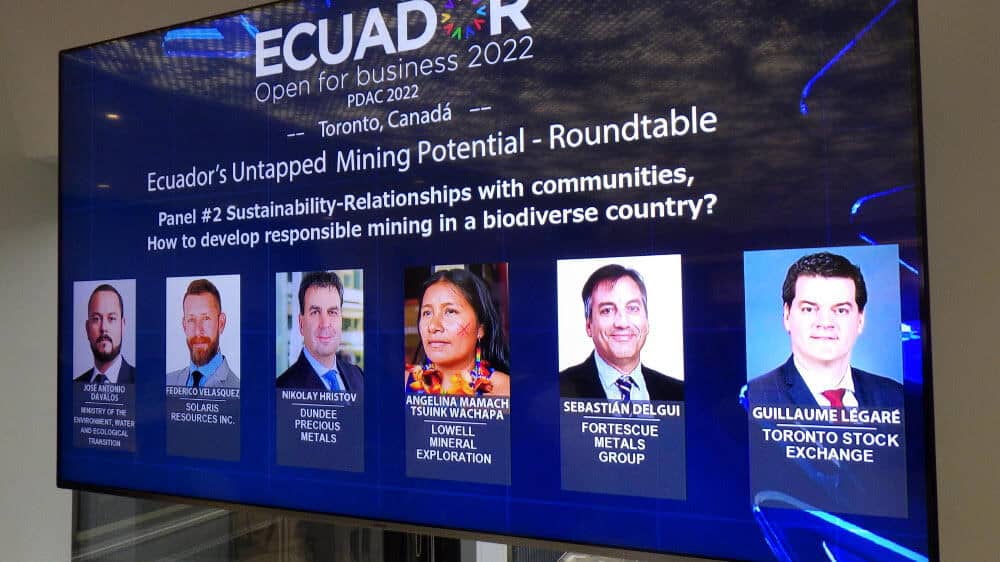 A slide from a presentation during Ecuador Day at the Prospectors and Developers Association of Canada in Toronto. Photo: Alan Bailey.

In Indigenous Shuar mythology, the Iwia is a gluttonous demon who is never satisfied.

According to Josefina Tunki, a leader of the Shuar Arutam in the Ecuadorian Amazon, mining companies are akin to the Iwia: they extract resources without ever becoming full.

Over the past two years, the first woman president of the Shuar Arutam Government Council (PSHA) has led opposition against one such demon: Canadian mining company Solaris Resources, which is aiming to develop the gold and copper Warintza mine in the southeast of the country.

This demon comes in a particularly beguiling disguise. Solaris has made big claims about their activities in Ecuador, emphasizing their model of dialogue between communities, the state and the private sector.

Company officials—including a vice president who was previously with British Columbia’s Ministry of Indigenous Relations and Reconciliation—suggest their efforts to build relationships locally has been informed by the Canadian government’s approach to Indigenous peoples. Besides the company, the federal government is also involved in helping establish a “free, prior and informed” consultation process with Ecuador.

But Shuar leaders like Tunki live in fear, and protest the extractive industries at great risk. Community members maintain they were not properly consulted by Solaris, and that the company’s model of dialogue has in fact displaced their ancestral governance systems. Meanwhile Canada’s government is chipping in by helping develop a licensing system in the country that could expand mining even more.

Solaris appears to have fully exported the Canadian reconciliation model: a new rhetorical and tactical embrace of Indigenous peoples, covering for the same old resource pillage.