U.K. court to hear lawsuit for victims of deadly Brazil mine collapse and flood 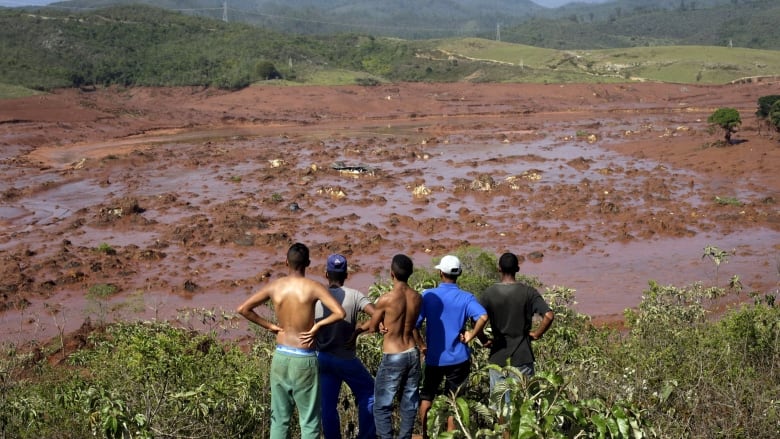 Photo: Residents observe the Bento Rodrigues district covered with mud after a dam owned by Vale and BHP burst in Mariana, Brazil on Nov. 6, 2015. (Ricardo Moraes/Reuters)

Deluge of toxic tailing water slammed into the town of Mariana in 2015, killing 19

Victims of a 2015 mine collapse disaster in Brazil are hopeful for justice after the U.K.'s court of appeal agreed to hear the case against one of the country's largest mining companies.

"This is the largest environmental disaster ever in Brazilian history," said Tom Goodhead, global managing partner for PGMBM, the law firm behind the lawsuit. "The economic impact and the environmental impact continues to this day."

In November 2015, two dams in the Brazilian city of Mariana collapsed, unleashing about 40 million cubic metres of water and iron ore tailings from the nearby mine, contaminating 640 km of water along the Doce River.

The flood submerged dozens of homes, killing 19 people. The mine reopened in 2020 and this year obtained approval to expand.

The mine is operated by the Brazilian company Samarco, which itself is a joint venture between Brazilian company Vale and British-Australian company BHP. The lawsuit, which includes more than 200,000 plaintiffs, is seeking more than 5 billion pounds ($7.7 billion Cdn) in compensation from BHP.

Goodhead says the "huge volume of toxic sludge" has affected over a million people across multiple Brazilian states to this day.

"Everybody from artisanal fishermen to business owners to traditional communities, the whole section of society in Brazil has been devastated as a result of the disaster," he told The Current's guest host Duncan McCue.

"There have been different concentrations of mercury and arsenic and chromium and other metals within the water which have led to biological devastation."

Catherine Coumans says it's no surprise that a program set up by the companies responsible for the disaster in the first place has been found lacking.

"These companies are often headquartered in very wealthy countries, such as Canada, but they operate in much poorer developing countries and there they cause serious environmental human rights abuses," said Coumans, the research coordinator and Asia Pacific Programme Coordinator for the NGO Mining Watch Canada.

"But it's almost impossible for people in those countries ... to hold these powerful multinationals to account."

No Canadian company is associated with the Mariana, Brazil, collapse.

Coumans says Canadian mining companies are often known around the world for the harm they've caused, and that more needs to be done to ensure accountability around the world.

It was introduced last November and completed its first reading in March.