Many governments allowed mining operations to continue during the pandemic citing the energy transition, while simultaneously deregulating the industry, studies find.

While most industries experienced shutdowns during the pandemic, the mining industry was, apart from some brief pauses, deemed essential in many countries. Mining operations continued during a time of rising mineral prices, leading to high profits.

The top mining companies saw their profits increase by 15% in 2020 from the year before, and in 2021, profits more than doubled. PricewaterhouseCoopers’ (PwC) 2021 annual mining report called 2020 a “banner year” for the mining sector.

“By any important measure, mining is one of the few industries that emerged from the worst of the COVID-19 economic crisis in excellent financial and operational shape,” said PWC. 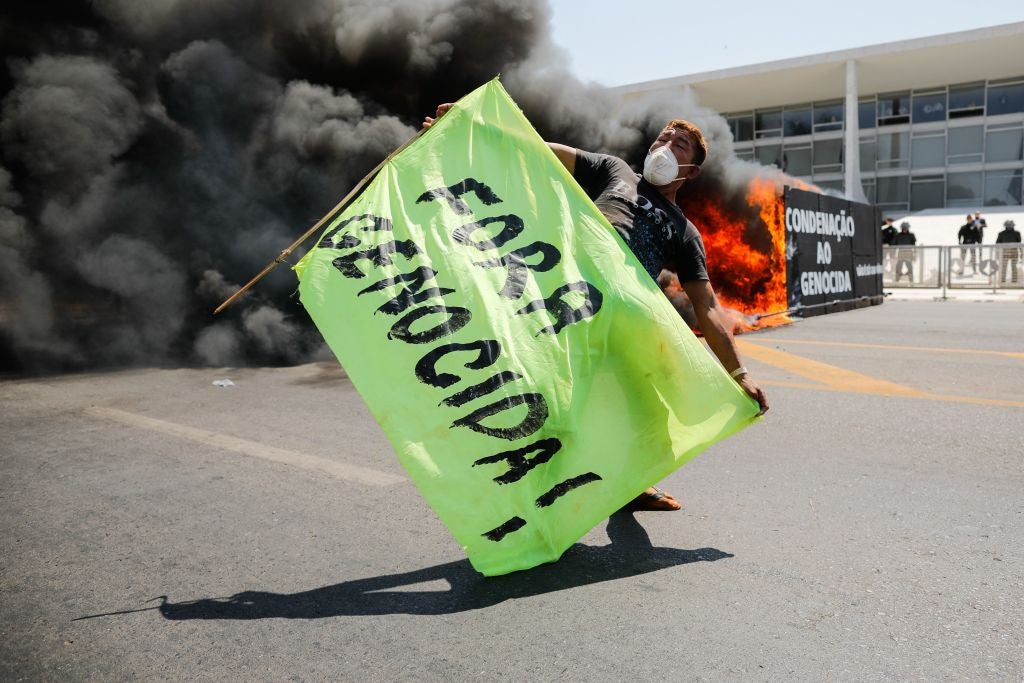 Indigenous people protest in front of the Planalto Palace in Brasilia on 26 August 2021, where the high court was considering a case that could open some native lands to agribusiness and mining. (Photo by Sergio Lima/AFP via Getty Images).

Two recent studies investigated the power dynamics between mining companies and local communities in Latin American and European countries during the pandemic. The researchers, from the Coalition Against the Mining Pandemic (a collective of organisations including the Institute for Policy Studies and MiningWatch Canada), found that many governments used both economic recovery and the energy transition as justification to continue mining production, while simultaneously deregulating the industry.

“After being declared ‘essential’ at the beginning of the pandemic by many of the countries in this research, there was further deregulation to facilitate mining operations and, in some places, mining activity gained even more support as an alleged force for economic recovery,” reads the report on Latin American countries. “In some cases, this coincided with the boost that the energy transition is giving to the mining of metals such as copper and lithium.”

Researchers are seeing the same patterns in Europe, where case studies in Turkey, Northern Ireland and Spain reveal that mining companies and governments are connecting economic recovery from the pandemic with the energy transition, promoting mining for the critical minerals needed for the energy transition within Europe’s borders.