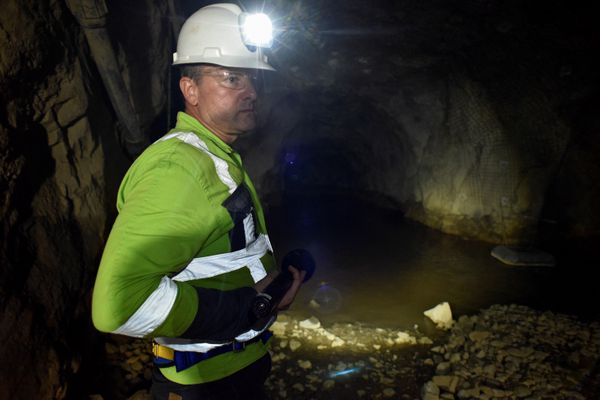 Hein Frey, vice-president of operations at Trevali Mining Corp. and one of two executives convicted of involuntary homicide, attends a rescue operation inside Perkoa mine in Burkina Faso on May 13.ANNE MIMAULT/Reuters

By Geoffrey York and Niall McGee, The Globe and Mail

A Canadian-owned mining company and two executives at its zinc mine in Burkina Faso have been convicted of involuntary homicide in connection with a flooding disaster that killed eight mine workers.

The flooding, which followed a sudden torrential rainfall at the site in April, trapped the workers underground and led to a 66-day search that eventually found them dead, several hundred metres below ground, after 165 million litres of water had been pumped out of the mine.

The disaster sparked outrage in Burkina Faso and led to charges of involuntary homicide against the mine operator and two executives at the mine, which is owned by Vancouver-based Trevali Mining Corp. TV-T N/Ano change

Mine manager Hein Frey, vice-president of operations at Trevali, was given a 24-month suspended sentence and ordered to pay a fine of about $4,000 in the court ruling on Wednesday. He is South African.

Daryl Christensen, of the Trevali contractor Byrnecut, was given a 12-month suspended sentence and a fine of about $2,000. He is reportedly Australian.

Mine operator Nantou Mining, which is 90 per cent owned by Trevali, was also convicted and fined about $4,000.

In response to questions from The Globe and Mail, a Trevali spokesman did not comment on the court verdict or whether the company would appeal it. Investor relations director Jason Mercier said the company was “hugely grateful” for the support it received from its employees and local communities at the court hearings.

He said the company had worked closely with the authorities to investigate the cause of the flood and was now in the process of receiving approvals that could allow it to restart the mine, although no decision has been made.

Last month, Trevali said its investigation found the flooding was caused by an “extreme weather event,” of the kind that has become less predictable because of climate change. The flood protection system at the mine “did not anticipate the intensity, scale or timing of the rainfall and flooding,” it said.

The company said it is taking steps to minimize flooding risks in the future, including the raising of a flood protection berm, the installation of an early warning system with real-time monitoring of rain and stream levels, and improved emergency management plans.

Analysts said the court verdict on Wednesday was significant. “It is extremely unusual for mining companies and executives to be charged, much less found guilty,” said Jamie Kneen, a researcher at Ottawa-based organization MiningWatch Canada.

He noted, however, that the amount of the court-ordered fines was “trivial” for a mining company. “While I think this case may serve as a warning, I don’t think it will be a real deterrent,” he told The Globe.