(Quebec) In the lead up to the Municipal Forum on mining and social acceptability, a coalition of organizations has unveiled a new map indicating a +46% boom in mining claims over the past two years in Abitibi-Témiscamingue, making it the region with the most mining claims in Quebec. Ten municipalities in Abitibi-Témiscamingue are now joining the national movement of municipalities and organizations calling on the government to strengthen the legal framework with respect to “Territories incompatible with mining (TIAM),” in order to protect water, biodiversity, and local populations.

This boom in mining claims is consistent with increasing US and global demand for battery minerals, such as lithium and graphite, as well as high gold prices. The organizations have documented a similar boom since 2020 in southeastern and southwestern Quebec. Highlights include:

Local and national signatory organizations (in alphabetical order - in French):

"Quebec must adopt a clear vision and set of objectives regarding land use planning and resource development. Mining activities have a direct impact on the environment, biodiversity, water, air and soil quality. The mining boom also exacerbates the socio-economic inequalities already present in our region. Thinking beyond so-called ‘future minerals,’ we must also think about our own future, that of our children, and the environment that must be protected.” Jacinthe Châteauvert, President of the Conseil régional de l'environnement de l'Abitibi-Témiscamingue (CREAT)

"The territories of Abitibi and Témiscamingue are being ceded by the provincial government to the mining companies for a pittance – without even considering to inform the people who live there. The local populations deserve transparency. Even though this should be the job of the government, the Regroupement Vigilance Mines de l'Abitibi et du Témiscamingue is there to accompany residents who want to know whether or not their property has been claimed.” - Marc Nantel, spokesperson for Revimat

"The mining industry is one of the three largest consumers of water in Quebec. It is in the interest of municipalities to protect the drinking water supply of their residents and they should have a say about which areas are protected from mining activities. We need to review the laws to ensure the protection of water – such as lakes, rivers, wetlands and eskers – is prioritized.” - Rébecca Pétrin, Executive Director of Eau Secours

"The current policies on mining represent an obstacle for the full implementation of the global framework on biodiversity, particularly as it relates to the target of protecting 30% of the territory by 2030. In the wake of COP15 on biodiversity held in Montreal in December, the government must prioritize biodiversity conservation in all its actions and modify its laws and policies accordingly." - Alice de Swarte, Senior Director at CPAWS Quebec

"Quebec must not bow before the global demand for gold and other so-called ‘future’ minerals. The energy transition must not be used as a pretext to justify more mining, to sacrifice the environment, or to trample on the rights of communities and Indigenous Peoples.” - Rodrigue Turgeon, spokesperson for the Coalition Quebec Meilleure Mine and MiningWatch Canada

“Adding the words ‘critical and strategic’ as qualifiers to describe minerals tends to suggest that it is more acceptable to mine these non-renewable resources, as if the impact on ecosystems is de facto less destructive than for other minerals. At best, this is green paint. At worst, it is a complete disregard by those who claim to responsibly manage our common resources on our behalf.” - Henri Jacob, President of Action Boreale

"The health of the environment can no longer be separated from human health. It is imperative that the associated and cumulative health effects from the environmental impacts of various projects be finally taken into account in the economic, industrial, and land-use planning across Quebec. What is at stake is true environmental justice and the viability of our healthcare system. Citizens have been harmed for decades by these decisions, decisions that need to be changed to adopt a more sustainable and healthy approach for people and the environment.” - Claudel Pétrin-Desrosiers, President of the Association québécoise des médecins pour l'environnement (AQME)

"The rush to extract minerals is nothing more than an ephemeral business opportunity. There is nothing strategic about destroying the environment and spaces where people live — be it through diesel machines or electric. Short-term profit will never bring about the equitable and environmentally sustainable society that our current responsibility to life and future generations demands.” - Chantal Levert, Réseau québécois des groupes écologistes

"It makes no sense to hope for a healthy ecological transition by resorting to resource extraction based on archaic legislation that ignores human realities and the necessary protection of land and biodiversity. We urgently need to rethink the rights and privileges enjoyed by the mining industry in order to rebalance the power the industry wields over local populations.” - Gabrielle Izaguirré-Falardeau, author and activist for climate and social justice in Abibiti-Témscamingue

"Natural resources are owned by the commons and must be managed democratically. Social harmony, peace of mind, economy, ecology: the extraction of mineral resources has a real and much greater impact than we are often led to believe.. We must be making these choices collectively.” - Abitibi-Ouest Sustainability Committee

"According to our research, we are seeing a significant increase in socio-ecological conflicts caused by the expansion of the extractive industry. There are currently 25 cases of conflict in Quebec involving all 17 Administrative Regions. The expansion of extractive frontiers seems endless, especially now, as it relates to the current trend of minerals for energy transition technologies. Affected populations are demanding to be informed and to take part in decisions that affect their realities.” - Isabel Orellana, Director of the Centre de recherche en éducation et formation relatives à l’environnement et à l’écocitoyenneté

"Environmental protection is the basis of a responsible and competitive mining industry. Quebec has many assets to position itself as a leader, but it must not give in to urgency. The government must meet environmental objectives and ensure that projects are socially acceptable to host communities.” - Martin Vaillancourt, Regroupement national des conseils régionaux de l'environnement

"Quebec cannot move forward with so-called ‘future minerals’ with laws and policies from the past. The Mining Act must be modernized, the rules governing territories incompatible with mining activity must be updated, and Quebec must adopt real environmental regulations specific to the mining sector that are enforced with the power of the law.” - Ugo Lapointe, co-founder and co-spokesperson of the Coalition Québec meilleure mine 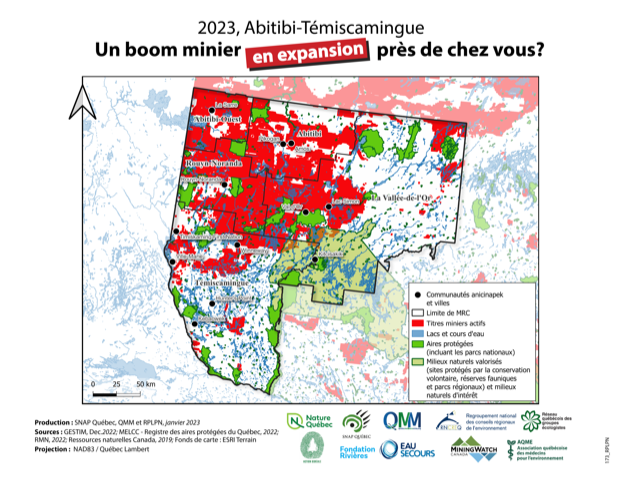 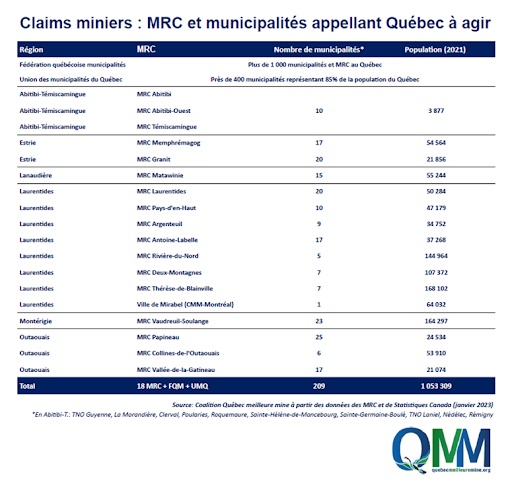 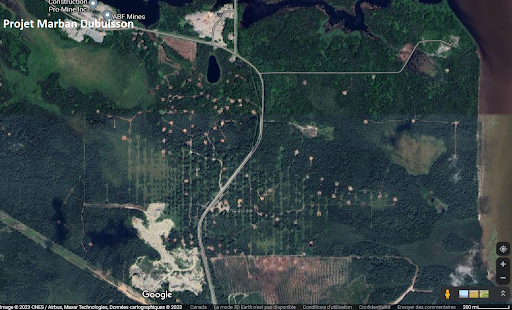 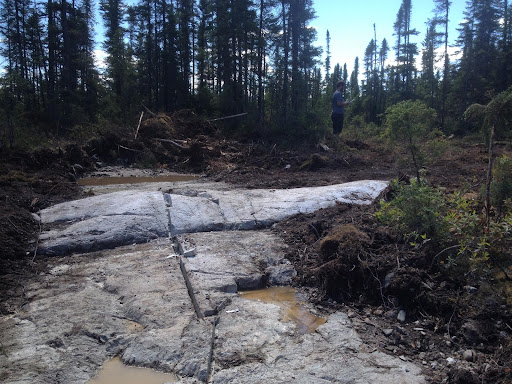 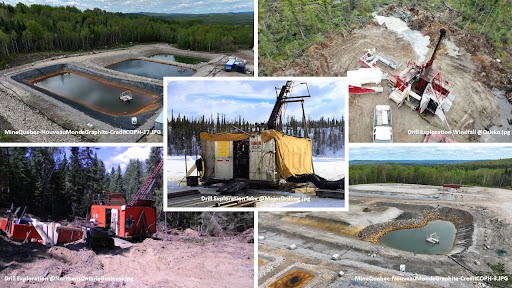