On May 4, MiningWatch Canada presented a study of Canadian mining presence in Central Asia to the Standing Committee on Foreign Affairs and International Trade. The study looked at the growing interest of Canadian companies in exploiting the mineral reserves in countries of the former Soviet Union. The brief concentrated on First Dynasty Mines in Armenia and Cameco activities in Kyrgyzstan.

In late 1996, there were over 40 Canadian companies with interests in 65 mineral properties in seven countries of the Former Soviet Union. Most of this activity has been in Russia, but Canadian mineral investment in Central Asia has grown as state-owned mining properties are offered for sale under pressure from the IMF. There is continuing interest in the region from World Wide Minerals, Placer Dome, Teck, and other Canadian companies which are engaged in exploration and negotiations. In the past year, The Northern Miner has reported on the following substantive Canadian projects in the region:

First Dynasty is one of Robert Friedland's companies. In Armenia, it consists of a tailings recovery plant at Ararat and the re-mining of tailings at the Zod and Megradzor mines. These are old mine sites, and there are already serious environmental problems to cope with including arsenic, hydro-carbons and acid mine drainage. Megradzor is in an earthquake zone, and the ore must be transported a considerable distance on existing railway infrastructure. The railroad to the Ararat facility is 110 km. The distance between Zod and the processing facility by railroad is about 235 km.The Zod Mine is close to a zone which has been the subject of hostilities between Armenia and Azerbaijan.

Some voices in Armenia are concerned about the company's relationship with the Armenian government and people. In March 1999, SNARK, the Armenian news agency reported “Neither government agency or official shall be allowed to require information on the course of works at the Armenian-Canadian gold mining plant Ararat. This provision is included in the agreement between the Armenian Industry and Trade Ministry, the state-owned Armgold company and Canada's First Dynasty Mines signed on June 24, 1998.”

The full text of our submission to SCFAIT is attached here. 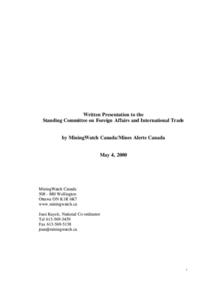