Effects of Mining on Women’s Health in Labrador West

In 2004 MiningWatch Canada partnered with the Labrador West Status of Women Council and the Femmes francophones de l’Ouest du Labrador on a joint effort to explore community women’s own perceptions of the effects on their health from living in a mining town. The final report for this project, in both official languages, was launched in Wabush/Labrador City on February 15, 2005. The results provide insight into specific areas of concern for women regarding their health, but clearly also point to potential impacts from mining on community health that need to be better understood. There is a significant amount of data that has been and is being gathered by Federal and Provincial governments and the mining companies themselves (IOC and Wabush Mines, owned by Cleveland Cliffs Inc.) that needs to be shared with the community.

The first stage of this project was a literature review, Overburdened: Understanding the Impacts of Mineral Extraction on Women’s Health in Mining Communities, published in May, 2004. 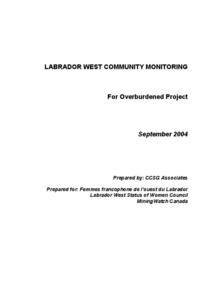 Effects of Mining on Women’s Health in Labrador West 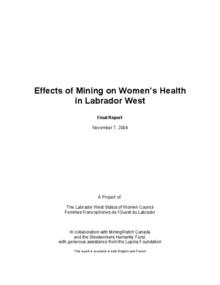