Behind the Pebble Mine: Hunter Dickinson Inc., the Canadian Mining Company You’ve Never Heard Of

This report examines the Hunter Dickinson family of companies, their track records and current situations, and the implications for the prospects of Northern Dynasty Mining, the company promoting the controversial Pebble mine project in Alaska’s sensitive Bristol Bay. The report labels Northern Dynasty as a highly risky speculative investment, calling its risk levels “unprecedented even among other junior mining companies.” It analyzes the risks for potential long-term investors in the Pebble project, based on a review of nineteen past and current projects promoted by the Vancouver-based Hunter Dickinson Incorporated (HDI) family. The report concludes that the long-term outcomes of HDI projects have not been good news for investors, for communities, for governments, or for the environment. It shows Pebble to be one of many troubled and troubling projects controlled and promoted by Hunter Dickinson over the past twenty-five years. 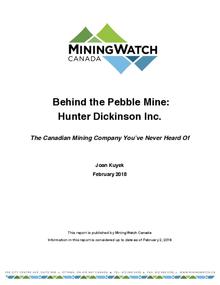 Behind the Pebble Mine: Hunter Dickinson Inc. – The Canadian Mining Company You’ve Never Heard Of