In January 2018, Acacia Mining released a draft Standard Operating Procedure for a new Community Grievance Process for the North Mara Gold Mine in Tarime, Tanzania. This review of Acacia/Barrick’s new draft Grievance Process is informed by field assessments carried out yearly at the North Mara mine by MiningWatch Canada in 2014, 2015, 2016 and 2017. In the course of these field assessments MiningWatch interviewed more than a hundred male and female victims, family members, and witnesses of alleged excess use of force by mine security and by police who guard the mine under an MOU between the mine and the Tanzania state. The field assessments both document the ongoing violence against local villagers, and assess the legitimacy and effectiveness of the mine’s nonjudicial grievance mechanism meant to address these alleged human rights abuses. Following each field visit MiningWatch summarized, and made public, key findings with respect to both the ongoing violence and the functioning of the mine’s grievance mechanism. We found the grievance mechanism to lack legitimacy and to be ineffective in addressing the violence and the alleged rights violations and harm suffered by victims of the mine’s security forces. We also found it to have been used strategically by the mine to evade legal action on behalf of victims. 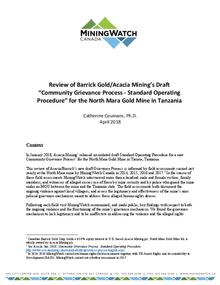 News International NGOs Stand with Dominicans Opposed to Pueblo Viejo Mine Expansion 04.10.2021
Blog Entry Declaration of Solidarity with the Communities of Monte Plata, Dominican Republic 04.10.2021
News Barrick Gold Mines Focus of Conflict Globally 04.05.2021
News Civil Society and Downstream Users to Barrick: No Dominican Republic Expansion 04.05.2021
News Barrick Gold lost its 'social licence' in Papua New Guinea. This is the price it's paying to earn it back 15.04.2021