During the last couple of decades—and particularly during the last ten years—mining companies have filed dozens of claims against Latin American countries before international arbitration panels, demanding compensation for court decisions, public policies and other government measures that they claim reduce the value of their investments. In a majority of these cases, the communities most affected by the mining projects have been actively organizing to defend their territories and natural resources. For local residents, these projects are a threat to their land, health, environment, self-determination and ways of life. These suits represent a further assault. For the global mining companies, international arbitration is merely another opportunity to strike it rich through reckless, casino-style gambling, given how the recourse they have to bring expensive lawsuits to international tribunals takes place within a system in which the deck is heavily stacked in their favour.

This paper analyses 38 cases filed by global mining corporations against Latin American governments using the investor-state dispute settlement (ISDS) system. Reflective of the disproportionate participation of Canadian financing in the global mining sector, the majority of these cases were brought or threatened by Canadian-domiciled firms, although U.S., U.K., South African, Swiss, French, Dutch, Chilean, Australian and East Indian companies have also taken part. While companies do not always win, the low risk that corporations face to gamble on a case valued in the millions, or even billions of dollars, along with the increasing availability of third-party funding and rules biased in their favour, provide strong incentives for ever more outrageous suits.

The purpose of this brief is to document the magnitude of the problem in the context of mining conflicts in Latin America and the troubling implications that these suits pose for the already difficult struggles of Indigenous Peoples and mining-affected communities to exercise their self-determination and to defend lands, water and ways of life from the destructive impacts of industrial mining. In particular, these suits further undermine the already marginal protections mining-affected communities have access to through their courts, regulatory systems and governments to guarantee their rights, enforce laws and regulations, and otherwise act in their interest.

This paper begins with an introduction to the problem of mining companies bringing ISDS suits by providing some data for extractive industries as a whole, but with a focus on mining cases. This is followed by an overview of the impacts of industrial mining in Latin America, as well as a description of the investor protection rules most frequently cited in mining arbitration suits. From there, we provide a more detailed account and analysis of nearly forty mining suits brought against Latin American governments to date, over two thirds of which have been brought in cases where communities have been defending land and territory. More than one third of the suits reviewed have been brought by mining companies against states that have nationalized mining projects or sought to boost taxes. These suits indicate how ISDS is also serving to constrain the resource management options of states, as described in greater detail elsewhere.

Finally, the paper concludes with an overview of alternatives being proposed to the current trade and investment framework. We include a reflection on the recent experiences in a transnational campaign against a mining suit against El Salvador, that helped pave the way for a historic ban on metals mining in the country. This and other recent developments should encourage affected communities, civil society organizations, and government officials to step up the global movement against international investment agreements, related laws, and contracts that threaten to dispossess mining-affected communities and peoples of not only their territories, land and water, but also their sovereignty and self-determination.

This report was co-authored by Jen Moore and Manuel Perez-Rocha and co-produced by MiningWatch Canada, the Institute for Policy Studies, and the Center for International Environmental Law. 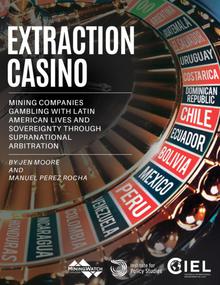