In April 2021, the International Articulation of Those Affected by Vale (A Articulação Internacional dos Atingidos e Atingidas pela Vale, AIAAV) launched the Vale 2021 Unsustainability Report. Now, after a collective process of review and translation, with the support of partners in Canada, AIAAV has launched the English version of the document. The intention is for the publication to reach an even wider circulation, since a company with global operations requires processes of resistance that are, also, global.

The publication, also called a mirror report, compares and deconstructs, with data, the information disclosed by Vale in its Sustainability Report, which the company publishes annually and through which it seeks to disclose its alleged social and environmental responsibility information to its shareholders and society in general.

Among the critical points of the 2021 mirror report, the Articulation highlights the following:

Note that a high-resolution PDF suitable for printing is available here. 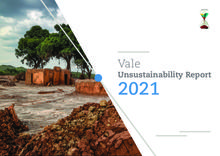