Not Yet a World Leader: Environmental Reviews of Metal Mines in British Columbia

In this report, Ecovision’s Stephen Hazell challenges British Columbia premier John Horgan’s claim that the province’s 2019 Environmental Assessment Act (BCEAA) is “world-leading”. “Not Yet a World Leader: Environmental Reviews of Metal Mines in British Columbia” finds that B.C actually lags other key jurisdictions by failing to assess some proposed metal mines that may have significant adverse effects.

The problem is that the B.C. regulation sets thresholds so high that many mine projects are not deemed to be reviewable and thus are not assessed. These high thresholds—call them loopholes— give mining companies a strong incentive for a “mining by instalment” approach to avoid assessment under the BCEAA for even large mines.

Projects like Elk Gold, Premier Gold, Copper Mountain Mine Expansion, Yellow Giant, and Bonanza Ledge are all unreviewed under the BCEAA, despite serious questions about the adverse environmental effect of their operations. Concerns about these mines include questions as to whether their levels of ore output and land clearance actually are lower than the regulated thresholds, effluent and tailings releases leading to water pollution, and impacts on fish habitat and populations.

That some mines are not assessed under BCEAA also has implications for B.C. and Canada’s international legal obligations. British Columbia is upstream of Alaska and Washington in almost all shared watersheds, which triggers responsibilities under international laws and accepted standards. B.C. appears to ignore these laws and standards in its environmental assessment process. 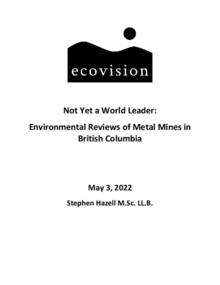 Not Yet a World Leader: Environmental Reviews of Metal Mines in British Columbia

News Why doesn’t B.C. have mining regulations that Brazil, Ecuador and China already have? 05.10.2022
Blog Entry Greenwashing at the World’s Biggest Mining Convention 05.08.2022
News B.C. has a growing mine waste problem. The risks could be catastrophic. 14.07.2022
News New Analysis Confirms High Risk, Threats Posed by B.C.'s Booming Mining Sector 14.07.2022
Blog Entry Is B.C. Really a World Leader When It Comes to Environmental Reviews of Metal Mines? 05.05.2022