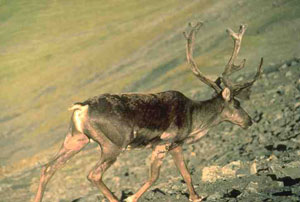 More than any other human activity, mining has been the impetus for industrial development of wilderness areas in British Columbia. Some of the most immediate and extreme impacts of mineral development are felt by wildlife.

At the exploration stage, impacts range from habitat disruption through road construction and attendant hunting and poaching to pollution impacts from abandoned fuel.

The construction or expansion of a mine in a previously wilderness location is invariably the source of significant ecological disruption. Typically, a project might include major new power corridors and roads, in addition to the pits, mills, waste rock and tailings dumps, holding ponds and so on of the mine site itself.

Caribou are an example of the potential threats posed by inapproproiate mineral development. Woodland caribou have declined or disappeared over much of their former North American range, and their numbers have dropped over most of southern BC. Research has shown that road construction leads to increased predation of caribou by wolves and hunters and poachers through facilitating access. Even decommissioned roads serve as travel corridors for wolves. At the South Kemess project in northern BC, the use of company vehicles for off-road recreation including harassment of caribou was one of several   mine certificate violations reported in 1997.

Impacts on wildlife are also felt by people who depend on them. In the Iskut-Stikine, guide outfitters are concerned about mineral exploration activity that impacts wildlife. Similarly, the Taku River Tlingit First Nation has expressed strong concern about the likley disruption of traplines by the planned Tulsequah Chief access road.

Two principles are necessary to minimize the negative impacts of mineral development on wildlife.