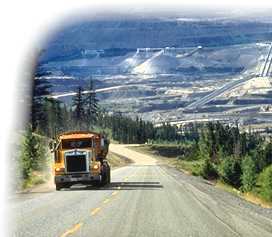 Some of the most significant direct and indirect impacts of mining result from the construction of exploration and mining roads.

Roads and unlimited access have a negative impact on wilderness areas in four ways:

Rosemary Fox, Smithers resident and EMCBC director, has this to say of one BC mining road:

The Ominica Mining Road, unilaterally pushed north over the years by Ministry of Mines...has had and continues to have serious impacts on fish and wildlife.  In the mid-'70s, the road was extended north across the headwaters of the Sustut into the Finaly drainage.  As a consequence, caribou in that area were decimated and salmon and steelhead rivers were damaged by siltation because of poor construction.

Road access is a major issue in the Taku watershed in northwestern British Columbia. The proposed reopening of the Tulsequah Chief gold mine, recently approved by the BC government, would push a road into one of the largest remaining unroaded areas in the province.