In October, MiningWatch's Catherine Coumans visited communities affected by TVI Pacific's mine in the municipality of Siocon, on the Zamboanga peninsula of the southern Philippine island of Mindanao. Less than a week after her return to Canada, a delegation from Siocon arrived in Ottawa for a week of meetings in Ottawa and Toronto with government officials, church leaders, non-governmental organizations, Aboriginal organizations, Filipino-Canadians, and the media (see press release and backgrounder on their visit). 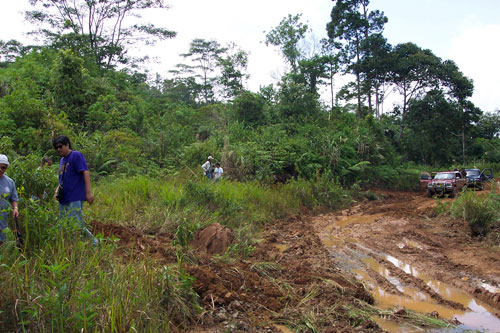 In spite of ten years of community opposition, TVI Pacific has persisted in its plans to mine gold and silver on the top of Mount Canatuan in the ancestral territory of the indigenous Subanon people. According to traditional leaders Catherine spoke to, known as Timuay, who can trace Subanon lineages back to the 17th century, Mount Canatuan is considered a sacred mountain and has held cultural significance for the Subanon for centuries. It is also the headwaters for the town's major rivers. 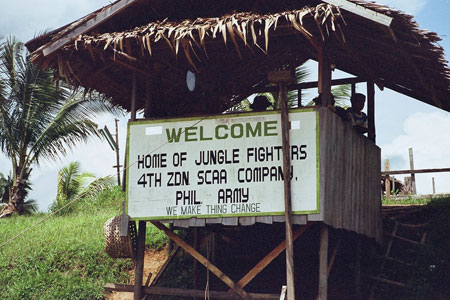 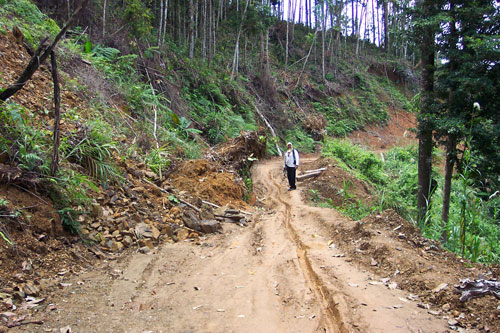 Members of each of these constituencies have recently joined together in the Save Siocon Paradise Movement. Mining actually started in May of this year, escalating existing tensions and exacerbating a history of violence around the project. TVI's mine is located in an area of such dangerous instability that the Canadian embassy has issued a travel advisory against travel by Canadians in the area. 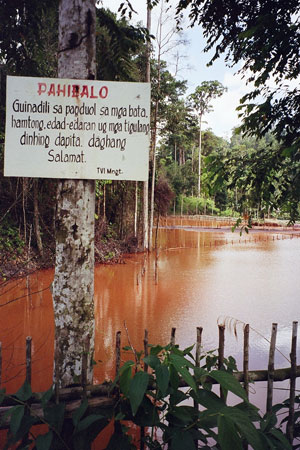 In March, citizens of Siocon started a month-long protest on a public road in the town in an attempt to block the passage of heavy equipment that TVI intended to transport to start mining on Mt. Canatuan. The protesters had a legal permit from the municipality for their protest. While in Siocon, Catherine interviewed numerous Siocon residents who had taken part in the protest. According to eyewitnesses and participants, the protest was peaceful and was widely supported by the citizens of Siocon, who traded places and food with one another to keep the protest going for a month. Witnesses told Catherine that on March 17th one of TVI's heavy equipment vehicles advanced on the protestors to try to break through their lines. The people in the front row linked arms to stand firm against the machinery. When it was clear that they would not move aside, military and TVI paramilitary guards shot into the ground in front of the protestors. The bullets ricocheted and wounded four picketers. 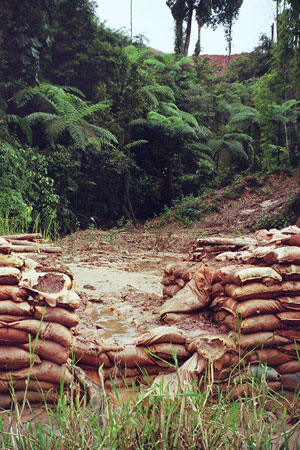 This event, as well as ongoing requests from local organizations for involvement by MiningWatch Canada, led to Catherine's October visit. She was accompanied by two members of the Canadian church-based organization KAIROS. The following are a few of the findings resulting from Catherine's visit to Siocon and its hamlet community of Canatuan.

• TVI's 1997 Environmental Compliance Certificate was issued under the condition (point 4) that: "The proponent shall maintain access roads and other public/private roads within the project site. Public roads shall be maintained open to allow the free flow of traffic..." TVI employs armed paramilitary guards known as Special Civilian Armed Auxiliaries (SCAA) who have been trained and armed by the Philippine military, but are actually employed by TVI. Catherine ran into five checkpoints set up by the SCAA between the town and the mine site. The first of these checkpoints is actually on a section of public road that is outside of TVI's concession. In spite of communications with the Canadian Embassy and with TVI officials, who provided TVI with information about the exact date of Catherine's trip to the mine site, lengthy delays at each checkpoint added hours to the trip. Furthermore, the road was also so badly maintained that a four wheel drive vehicle had to backtrack and take an alternate route due to blockage by a fallen tree, became stuck in deep mud, and had to leave the road to avoid a washed out section (see pictures). Finally, the most serious concern is that Catherine was told by residents of the hamlet of Canatuan, as well as others from the town of Siocon, that they have been systematically denied access to Canatuan (turned back at the first check point) since the spring. In all cases these are individuals who have openly opposed the mine through peaceful means.

• TVI states in its literature that the company is mining in an environmentally responsible manner as evidenced by the fact that it is capturing siltation runoff from the mine in sandbag "siltation ponds" (see pictures on TVI's web site). These "siltation ponds" are wholly inadequate and ill-maintained. Siltation from the mine site was freely entering the environment through ripped, sagging and non-existent sandbags (see picture).

• TVI states in its literature that the company's engineered waste impoundment (tailings pond) is state of the art. Catherine found that the first tailings pond (not shown on TVI's web site), which was only supplemented by a new one in October of this year, is clearly not an engineered waste disposal site as it has dead trees standing in the waste (see picture). It is from this impoundment that Catherine was told by a former mine worker and residents of the town of Siocon that waste has regularly leaked into the town's river system.