Corruption and Oppression in Chiapas, Mexico 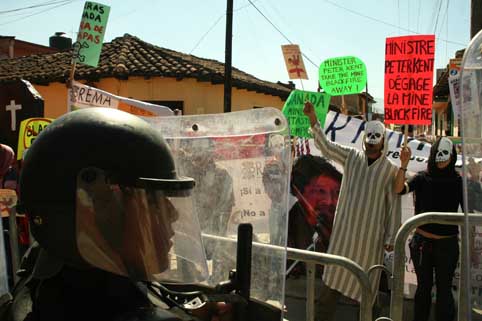 In late November 2009, community activist Mariano Abarca Roblero was gunned down outside his home in the State of Chiapas in the south of Mexico. Mariano was a leader of the Mexican Network of People Affected by Mining (REMA). REMA had brought public attention to the region’s struggle against Canadian company Blackfire Exploration which has a barite mining project in Chiapas. Before his death, Mariano stated that, “If anything happens to me, I blame the Canadian mining company Blackfire.” Three men linked to Blackfire were quickly arrested in relation to his murder.

This tragic event also highlighted earlier revelations that Blackfire Exploration had made sizeable payments to the personal bank account of the local mayor, allegedly in return for his assistance in quashing opposition to the mine. The company had filed court documents in Chiapas to support its complaint about the mayor’s escalating demands, but also showing that it had been paying him off for over a year before bringing the complaint.

MiningWatch joined with other organizations – Common Frontiers, Council of Canadians, United Steelworkers, Comité pour les droits humains en Amérique latine, Atlantic Regional Solidarity Network, Sierra Club Canada, L’Entraide missionnaire, and the Social Justice Committee – to register a complaint with the RCMP on March 10, 2010, under the Corruption of Foreign Public Officials Act, asking for a criminal investigation of Blackfire Exploration’s activities in Chiapas, and specifically the payments to the Mayor of Chicomuselo.

The RCMP has indicated that it is looking into the matter, but of course cannot confirm whether a criminal investigation is underway. In the meantime, the registration of the complaint allowed us and a broad grouping of organizations concerned with the case to alert the media and raise this issue with the Canadian public as yet another example of abuse related to mining operations outside our borders.

We were also part of a fact-finding delegation that travelled to Mexico from March 21 to 27 that included representatives of Common Frontiers and United Steelworkers and met with Mariano’s family, community representatives, and various organisations as well as visiting the mine site. A report on their findings is available on our web site, along with Blackfire Exploration’s agreements with local landowners that they say have not been respected and documentation of the company’s payments to the Mayor of Chicomuselo.