Until just a month ago, official media represented the expansion of the Canadian mining companies that operate in Santa Cruz into Chubut and Río Negro as a fait accompli. "We managed to exploit gold and silver on the Chubut plateau," said the triumphant President of the Nation, Alberto Fernández, on December 18 at Argentine Business Association end of the year lunch. The world needed a lot of metals for the climate smart energy transition and global markets seemed to be finally come along. Twenty years later, the same proposal: deliver gold and silver deposits as payment of debts.

The global coronavirus crisis came at a time of Canadianization and re-concentration of mining interests in Patagonia. Cerrado Gold announced a few days ago the purchase of Minera Don Nicolás, the only "national" gold producer in Santa Cruz. In July 2019, the British Patagonia Gold Plc merged with Hunt Mining of Canada and renamed itself as Patagonia Gold Corporation. The new company is no longer listed in London but in Toronto.

At the same time, Yamana Gold, owner of the Cordon Esquel project, sold its gold mines in Brazil to Canada's Leagold in 2018. In turn, Leagold merged with Equinox Gold in December 2019. Ross Beaty, founder of Pan American Silver, is Equinox Gold’s president and Peter Marrone, CEO of Yamana Gold, is now one of its directors.

The Calcatreu project, the Esquel, Navidad and Angela mine reactivation projects, and the Manantial Espejo and Joaquín-COSE and Cerro Moro mines in Santa Cruz now constitute the same interest. And the modification of Law 5001 that prohibits open pit metal mining in Chubut is key for the government to enable it. They tried it in Mendoza at the end of last year, but the social mobilization made them backtrack.

The response from the Chubut environmental assemblies was equally powerful: massive marches in Rawson, Trelew, Gaiman, Puerto Madryn and Comodoro Rivadavia, accompanied the Esquel marches. New assemblies formed in towns in the interior such as Paso del Sapo, Laguna Fria and Chacay Oeste. On March 4, the Union of Patagonian Assemblies (UAP) filed a complaint and request of precautionary measures to the Inter-American Commission on Human Rights (IACHR) in defense of the Patagonian river basin system threatened by mega mining projects. The Assembly in Defense of the Territory of Puerto Madryn helped released a map that reveals the damage caused by eight mining projects owned by Pan American Silver, from Mexico to Argentina.

While the temporary suspension of mining operations does not appear to be a major problem for mining companies, a long season of low silver, lead and zinc prices is. At the same time, funding for dirty metal extraction projects is gone. Canadian miners, go home and stay home!

Photo: Young protesters from Laguna Fría demonstrate against the modification of the law 5001 that prohibits mining in Chubut. "Water is more precious than gold!" they claim. Source: Assembly in Defense of the Territory.jpg 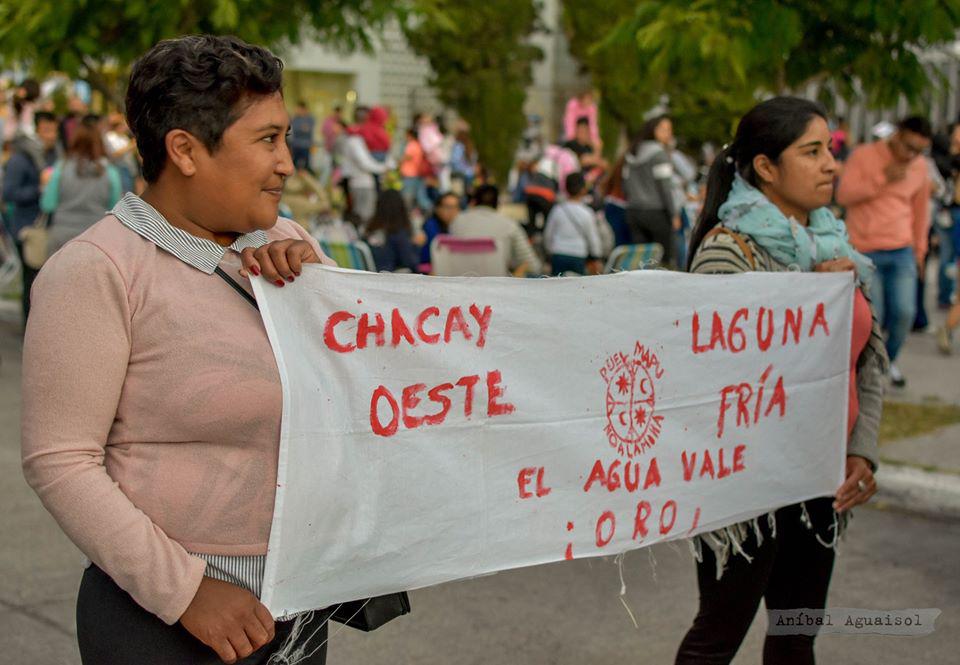