(Ottawa) More than seven years since the murder of Mariano Abarca in Chicomuselo, Chiapas, his widow and children announced this week that they have filed a petition with the Inter-American Commission on Human Rights against the Mexican government. Mariano was shot at close range and murdered outside his restaurant on November 27, 2009 in connection with his leadership in the fight against the social and environmental impacts of Blackfire Exploration’s barite mine that operated for two years in Chiapas.

The Abarca family and co-petitioners allege that the Mexican state is responsible for failing to take the necessary measures to protect Abarca’s life and for not carrying out a serious, objective, and impartial investigation into his murder, in which all of the suspects have ties with the Canadian mining company. The petition further argues that the Mexican state let itself be influenced by repeated Canadian Embassy interventions on behalf of the company.

Miguel Angel de los Santos, the family’s lawyer, commented at a press conference that the Canadian Embassy was “very active” throughout the period that Blackfire Exploration operated in Chicomuselo. Based on information obtained under the Canadian Access to Information Act, he described the Embassy’s interventions as designed to “pave the way for the company’s operations in Chicomuselo,” adding that “if there had not been such diplomatic pressure, things could have ended up differently (for Mariano).”

The Chiapas-based organization Otros Mundos Chiapas, a co-petitioner in the complaint, described Mariano’s assassination as “a murder foretold.” Otros Mundos spokesperson Libertad Díaz remarked that it follows a pernicious pattern of threats, criminalization and violence against many communities in Chiapas, as in much of Mexico and Latin America, who are facing increasing pressures from mega-projects on their lands. When community leaders cannot be corrupted, intimidated or frightened into backing down, such as in Mariano’s case, they are all too frequently murdered.

Given how few families and communities have support to bring their case to international bodies or to document what they have been through, co-petitioner REMA (Mexican Network of Mining-Affected Peoples) sees the Abarca family’s fight for justice as the fight of many.

Research undertaken by the Justice and Corporate Accountability Project has found that between 2000 and 2015 there were at least 44 deaths, over 400 people injured, and over 700 cases of criminalization in connection with 28 Canadian mining companies operating in 13 countries in Latin America.

The communiqué read by José Luis Abarca during the press conference in Mexico City follows. A summary of the petition is available here.

Communiqué read by José Luis Abarca Montejo during a press conference in Mexico City on June 28, 2017 and translated from the original in Spanish available here:

On Jun 26, 2017, my family and I, José Luis Abarca Montejo, sent a petition to the Inter American Commission on Human Rights (IACHR) against the state of Mexico for violations of the right to life, humane treatment, personal liberty, and to a fair trial, among others that were violated as a result of the murder of my father, Mariano Abarca Roblero on November 27, 2009.

He was killed by assassins with ties to the Canadian mining company Blackfire Exploration, while he was talking with a friend in front of his restaurant in Chicomuselo, Chiapas. His friend, Orlando Velázquez Rodríguez, who was also part of the local community struggle was also seriously injured in the attack.

My father was born April 11, 1959 in Chicomuselo, Chiapas. He was a human rights and environment defender who was highly regarded in his community and was also a founding member of the Mexican Network of Mining-Affected Peoples (REMA).

His murder was an attempt to silence and demobilize the struggle in defence of territory, life and the environment that my father led in the community of Chicomuselo, where people were fighting for Blackfire to leave the municipality and stop the damage it was doing to people’s health and the environment.

Before his assassination, and during the entire conflict, my father was the victim of a long process of criminalization, intimidation, harassment, stigmatization and threats that included false accusations for which he had to spend time in jail. Nonetheless, his most important transgression was his unyielding fight in defence of human rights. His conviction and his spirit moved him to fight for quick and sure justice for those, who arbitrarily and in repeat violation of the law, break the rules and seek to protect themselves through corruption and impunity, which has long been a pattern of behaviour of the Mexican government.

My father brought to light and denounced each of the actors involved in pillaging the environment in our community, naming those responsible for the acts of intimidation that he and the social movement faced. Among those who attacked him and who he called out were the former municipal president of Chicomuselo, Mr. Julio César Velásquez Calderón, and the then Governor of Chiapas, Mr. Juan Sabines Guerrero.

Further, he did not shy away from naming the directors of the Canadian company Blackfire Exploration among those principally responsible, who enjoyed undue support from state and municipal police and participated in various acts of aggression by company workers who were armed and who threatened those involved in the local resistance.

We denounce that since November 27, 2009 – the day of the underhanded and cowardly crime against my father – until today, the state’s investigation has stagnated. After detaining several suspects, all of whom had some link to Blackfire, and even sentencing one of them in 2010, all are free today. Neither have new lines of investigation been pursued to identify the material and intellectual authors of the crime that would provide some comfort to our family and the rest of those in this struggle.

Our family is outraged by the inefficiency, the ineffectiveness, and the clumsiness of the justice system in Mexico. The Mexican government has expressed its disregard and demonstrated very little interest in our demands. As such, it has demonstrated its indifference to our right to know the truth and negated one of its most basic roles to procure justice.

During these years of impunity, our family has fought for justice for the assassination of my father. Over the years, we have strengthened various areas of investigation, such as documenting the inappropriate interference of the Canadian Embassy in favour of Blackfire. Despite having considerable knowledge about the local conflict and the risks that my father faced, the Embassy not only failed to respond, but rather in a full display of Canadian business diplomacy, legitimizing and supporting Blackfire’s violent and abusive behaviour.

In addition, we have unsuccessfully explored the limited avenues for justice in Mexico and Canada. Once again, this has demonstrated to us the level of institutional abandonment that leaves us as Mexicans defenceless in the face of abuse from the system.

As as result, we have decided to turn to the Inter American Commission of Human Rights (IACHR) to present a complaint against the Mexican state for failing first to protect my father’s life and then in the search for justice following his assassination. Accompanying us in this complaint as petitioners are the Mexican Network of Mining Affected Peoples (REMA) - of which my father was a member -, Otros Mundos A.C. Chiapas/Friends of the Earth Mexico and the Human Rights Centre at the Faculty of Law at the Autonomous University of Chiapas (UNACH).

As we have indicated, the attack that took the life of my father is not a unique nor an isolated event against human rights and environment defenders in Mexico or in Latin America. Rather it is part of a trend in which there are four sets of actors acting against the many processes of resistance in the region: corrupt and de-nationalized governments who, among other things, have developed laws to justify and legalize pillage; the Canadian government that insists on leading the way to dispossess peoples in the Americas of their shared natural commons; police and military forces that act as private protection forces for transnational companies, and; assassins and organized crime groups who are paid to inflict fear, terror and death in communities.

We hope that the IACHR will receive, review and accept this new challenge for justice that we are putting in its hands. We are hopeful that the Commission will help us advance in this struggle against impunity that is essential to fully exercising our human rights. At the same time, we hope to set a legal precedent at the international level by demonstrating the links between the Mexican authorities and the Canadian Embassy and the way this allows mining companies to threaten the lives of human rights defenders in Mexico. 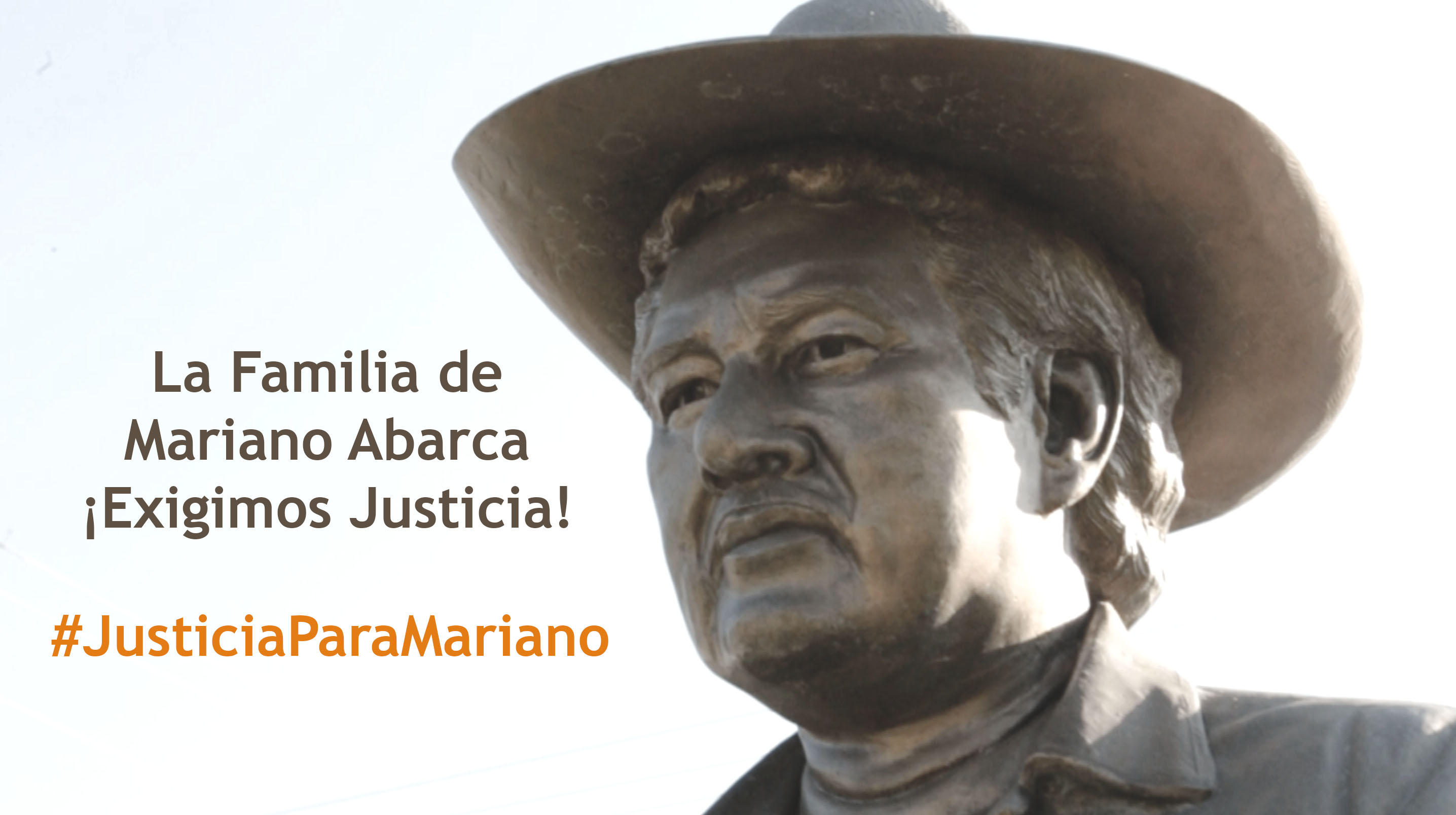