Members of the civil society group “No a la Mina Esquel” are condemning lobbying efforts by Canadian company Pan American Silver (PAS) in the weeks prior to newly-elected representatives taking office in the southern Argentine province of Chubut. PAS’s plans to develop an open pit silver-lead mine in Chubut have been stymied for years due to a legislative ban on mining in the province.

Several socio-environmental assemblies in the Patagonia region launched the “#WeAreWatchingYou” (#LosEstamosObservando) digital campaign in response to the constant lobbying efforts by the Canadian company. They also formed commissions to monitor the legislative sessions in an effort to prevent changes to existing legislation banning open pit mining during the electoral transition.

The pro-mining lobby isn’t new. Ross Beaty, founder and chairman of PAS’ Board, met twice with outgoing Argentinian President Mauricio Macri, first in Buenos Aires in 2016, and later in Davos in 2018, to discuss the company’s operations. PAS also operates the Manantial Espejo mine in the neighbouring province of Santa Cruz.

PAS acquired Navidad from Aquiline Resources in 2009, despite provincial legislation banning open-pit metal mining and the use of cyanide in processing. The ban, the first of its kind in Argentina, was the product of a widespread mobilization against Canadian mining company Meridian Gold (later acquired by Yamana Gold) in the region, with an overwhelming majority rejecting the mining project in a 2003 referendum.

“When PAS acquired the Navidad project in 2009, it did so with full knowledge that there was a ban on open-pit mining, not to mention social opposition to large scale mining. Since that time, the company has dedicated itself to influencing the legislature to modify the law in favour of the project, in total disregard for local communities and the environment. The company’s bad behavior in Argentina is a pattern we see repeated in other countries,” said Kirsten Francescone, Latin America coordinator for MiningWatch Canada.

Last week, the company was criticized in Beaty’s home base of Vancouver by Indigenous representatives from Guatemala and British Columbia for discrimination and failure to respect communities’ right to self-determination. The Union of British Columbia Indian Chiefs joined Xinka people impacted by PAS’ Escobal silver mine in Guatemala in denouncing the company for buying yet another suspended project with zero social licence and that is embroiled in a flawed and exclusionary state-led consultation process. Xinka community representative, Luis Fernando Garcia Monroy, accompanied by allies in Vancouver, presented a petition  signed by over 8,000 Canadians in front of the Beaty Centre of Biodiversity, demanding that the Xinka not be discriminated against in this process.

Communities around the Navidad project are worried that the increase in lobbying will transform Chubut into a mining province, contrary to the desires of the majority of its population. Numerous bills under discussion in the legislature, including one that would permit a “mining zone” within the ban, are aimed at paving the way for Pan American Silver to operate.

In 2014, environmental groups presented a draft initiative to strengthen the existing open-pit mining ban, in force since 2003. However, an ominous legislative session completely distorted the bill and it did not proceed. In the middle of that debate, a legislator was photographed reading a text message sent by a director of Yamana Gold coaching his intervention.

In April 2018, with the support of more than 17,000 signatures, the assemblies again asked the Legislature to discuss the Popular Initiative presented in 2014. They received no response.

On November 28, The Assemblies of The Communities of Chubut denouced the presence of the Canadian consular officer, Dale Smyl, and his assistant at the municipality of the Madryn Port, where they met with the mayor of the municipality and the vice-govenor elect. According to communities, the Madryn Port would be the export point for the mineral, if the mine were to commence production.

"We make public our same rejection of Ricardo Sastre, the Mayor of Puerto Madryn and vice-governor elect, and the Canadian Consular Officer, who have been wandering around the Madryn Port, to which they wish to make part of their scheme of plunder and death." 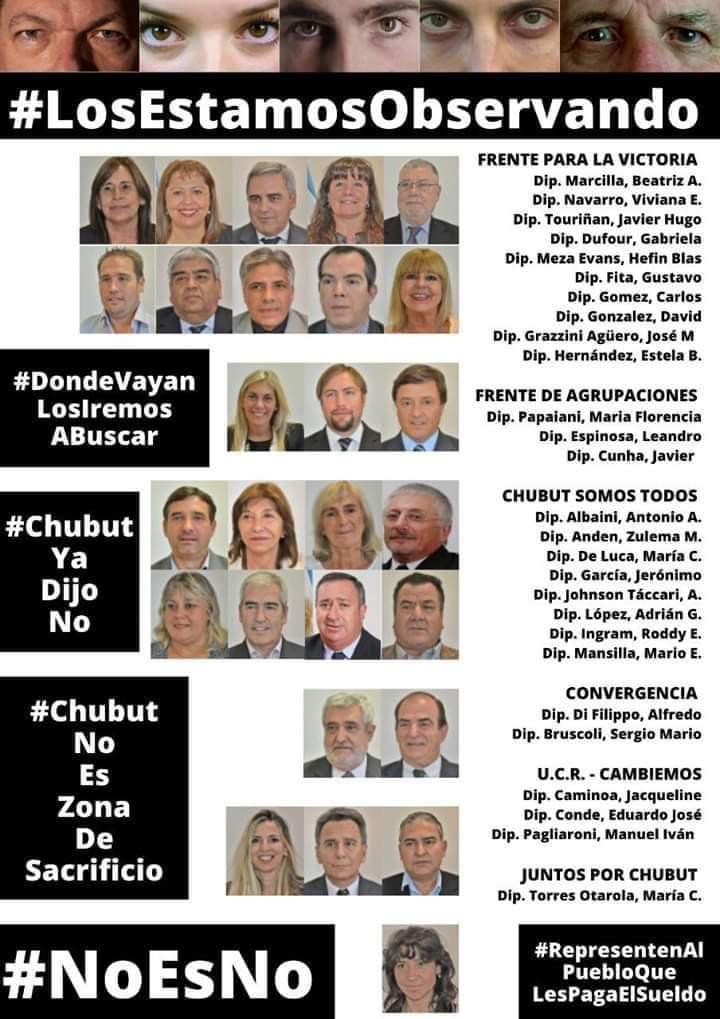