Mexican Organisations Call for Investigation into Canadian Embassy in Mexico

Lawyers in Canada representing the family of Mariano Abarca, Otros Mundos Chiapas, the Mexican Network of People Affected by Mining-REMA, and other Mexican and Canadian allies will present arguments before the Canadian Federal Court of Appeal on November 8, 2021. We want the Canadian embassy in Mexico to be investigated for putting Mariano's life at increased risk in the weeks and months prior to his murder on November 27, 2009. During this time, the embassy was actively involved in political lobbying on behalf of Blackfire Exploration Ltd., even though the embassy knew that the company and its workers were threatening Mariano’s life for denouncing the social and environmental harms caused by a barite mine in Chicomuselo, Chiapas.

We are going into this hearing with strength, given that in addition to our own lawyers, the court has agreed to hear legal arguments in favour of an investigation presented by Amnesty International Canada, Canadian Lawyers for International Human Rights (CLAIHR), the International Justice and Human Rights Clinic at the University of British Columbia in Vancouver, and the Centre for Free Expression at Ryerson University in Toronto. If the Federal Court of Appeal rules in favour of the family, our request for an investigation will be referred back to the Public Service Integrity Commissioner (PSIC).

Mariano Abarca was a founder of our network and an important environmental activist in Chiapas, Mexico. He warned the embassy that his life and the safety of his family and other community members were in danger, yet Canadian diplomacy preferred to advance the interests of Blackfire and mining in Chiapas. The embassy sent a delegation to the government of Chiapas in October 2009, asking the government to quell protests. Six weeks later, Mariano was murdered. These and other actions have been fully documented. Blackfire's barite mine was suspended a few days after Mariano's murder, giving credence to his struggle and the sustained effort of many others in Chicomuselo.

To date, however, there has been no serious investigation into the case. The three people who were detained or arrested were released, and Blackfire has never been investigated —despite the fact that all of the initial suspects had a connection to the company. For this reason, in addition to the complaint filed in Canada, Mariano's family has filed a petition before the Inter-American Commission on Human Rights against the Mexican State for violations of the right to life, personal integrity, and judicial guarantees, among other things.

For Mariano’s family, REMA, and other civil society organisations— why is it in the public interest for the Canadian government to launch an investigation into the actions of the embassy?

For all these reasons, we look forward to the November 8 hearing, which will take place both in-person and virtually, with anticipation. It is an important opportunity to shed light on the abuses committed not only by mining companies, but also the governments who advance corporate interests.

The Canadian embassy in Mexico must be held accountable for its share of responsibility in the murder of Mariano Abarca! 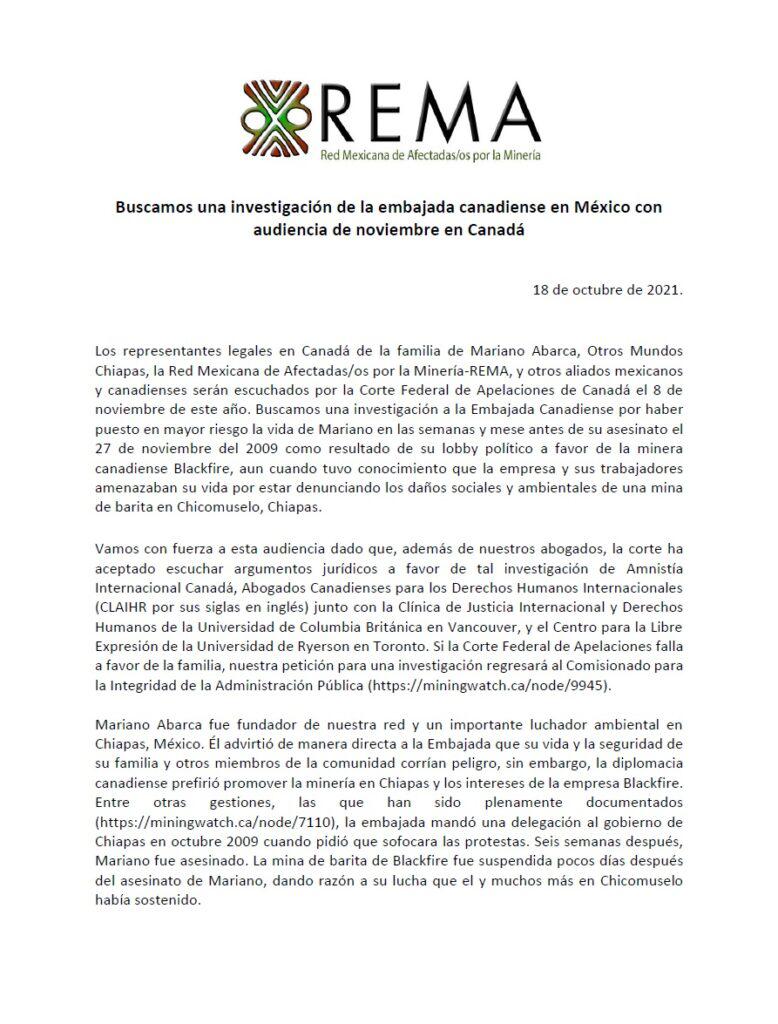