Mining Claims: the Urgent Need for a Moratorium

(Quebec) In the aftermath of COP27 on climate change and as the Quebec Mines + Energy conference opens today under the theme "A transition powered by our resources," a coalition of environmental organizations unveils new maps showing a boom in mining claims ranging from 63.4% to 139% over the past 24 months in southeastern Quebec (Eastern Townships, Lower St. Lawrence, Gaspésie). The coalition joins dozens of municipalities in calling for a moratorium on the granting of new claims until regulations under the Mining Act are changed to protect the environment and the population.

This latest boom in mining claims is in addition to the one already documented earlier this year in southwestern Quebec and is tied to the increasing global demand for minerals to supply the military and energy industries in particular. This boom is also tied to the launch of the Quebec Plan for the Development of Critical and Strategic Minerals in the fall of 2020, as well as the high price of gold over the past two years — 92% of which is used by the financial and jewelry industries.

The organizations note the following highlights:

"The survival of the Gaspé caribou will depend on our ability to provide it with more land. The mining claims adjacent to the Parc de la Gaspésie will quickly become an obstacle to the expansion of a dedicated protected area, an essential condition for its survival.” - Pascal Bergeron, spokesperson for Environnement Vert Plus in Gaspésie

"The last few years have made us realize the importance of increasing our food autonomy. Is it normal to allow for the purchase of mining claims on the fertile agricultural lands of the St. Lawrence Valley and southern Quebec?  Will the government really agree to sacrifice Quebec's food supply so the mining industry can profit?” - Noémi Cantin, co-spokesperson for the citizen committee Vivre sans mine en Estrie

"The current mining system is an obstacle to implementing the next global framework on biodiversity, particularly in terms of achieving the target of 30% environmental conservation. In the run-up to COP15 on biodiversity in Montreal in December, the government must prioritize biodiversity conservation in all its actions and adjust its laws and policies accordingly." - Alice de Swarte, Senior Director at SNAP Quebec

"In December at COP15, the eyes of the world will look to Montreal for the future of global biodiversity. Quebec must set an example. However, the presence of mining claims in the Gaspé Park prevents the effective protection of the essential habitat for the Caribou — a major emblem of biodiversity in the country and a symbol of hope to rally citizens to act in the face of a global loss of biodiversity." - Cyril Frazao, Executive Director of Nature Québec

"Environmental protection forms the basis of a responsible and competitive mining industry. Quebec has many assets to position itself as a leader, but it must not give in to this sense of urgency. The government must meet its environmental objectives and ensure that projects are socially acceptable to host communities.” - Martin Vaillancourt, Regroupement national des conseils régionaux de l'environnement

"Quebec must not bend to the world’s demand for gold, nor that of the American military and automobile industries. The energy transition must not be used as a pretext for sacrificing the environment, forcing [mining] projects on communities, or for trampling on the rights of Indigenous nations.” - Rodrigue Turgeon, spokesperson for the Québec meilleure mine coalition and MiningWatch Canada

"Adding the words ‘critical and strategic’ as qualifiers to describe minerals tends to suggest that it is more acceptable to mine these non-renewable resources, as if the impact on ecosystems is de facto less destructive than for other minerals. At best, this is green paint. At worst, it is a complete disregard by those who claim to responsibly manage our common resources on our behalf.” - Henri Jacob, President of Action Boreale

"This rush to extract minerals is nothing more than an ephemeral business opportunity. There is nothing strategic about destroying the environment and spaces where people live — be it through diesel machines or electric. Short-term profit will never bring about the equitable and environmentally sustainable society that our current responsibility to life and future generations demands.” - Chantal Levert, Réseau québécois des groupes écologistes

"Municipalities are responsible for ensuring the safe supply of drinking water for their citizens and should have a say in any new mining projects within their boundaries. These projects always pose a risk to the water given the destruction of water sources, the discharge of wastewater, and the unbridled water consumption by this industry. We must protect these environments. Our drinking water, our quality of life, depends on it.” - Rébecca Pétrin, Eau Secours

"According to our research, we are seeing a significant increase in socio-ecological conflicts caused by the expansion of the extractive industry. There are currently 25 cases of conflict in Quebec involving all 17 Administrative Regions. The expansion of extractive frontiers seems endless, especially now, in connection with the current trend of minerals for energy transition technologies. The affected populations are demanding to be informed and to take part in decisions that affect their realities.” - Isabel Orellana, Director of the Centre de recherche en éducation et formation relatives à l’environnement et à l’écocitoyenneté

"The health of the environment can no longer be separated from human health. It is imperative that the associated and cumulative health effects from the environmental impacts of various projects be finally taken into account in the economic, industrial, and land-use planning across Quebec. What is at stake is true environmental justice and the viability of our healthcare system. Citizens have been harmed for decades by these decisions, decisions that need to be changed to adopt a more sustainable and healthy perspective for people and the environment.” - Claudel Pétrin-Desrosiers, President of the Association québécoise des médecins pour l'environnement (AQME)

"Quebec cannot move forward with so-called ‘future minerals’ with laws and policies from the past. The Mining Act must be modernized, the rules governing territories incompatible with mining activity must be updated, and Quebec must adopt real environmental regulations specific to the mining sector that are enforced with the power of the law.” - Ugo Lapointe, co-founder and co-spokesperson of the Québec meilleure mine coalition 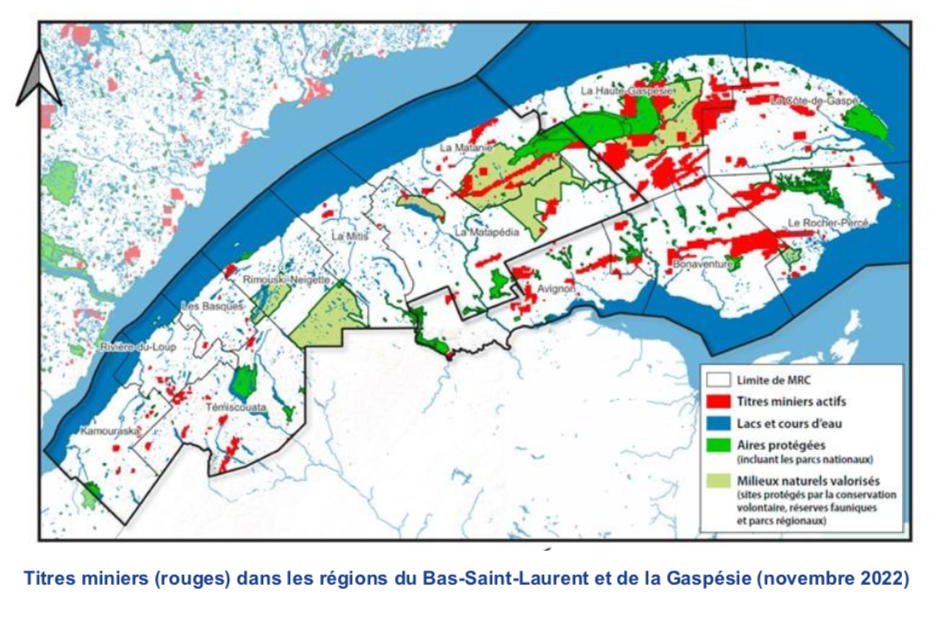 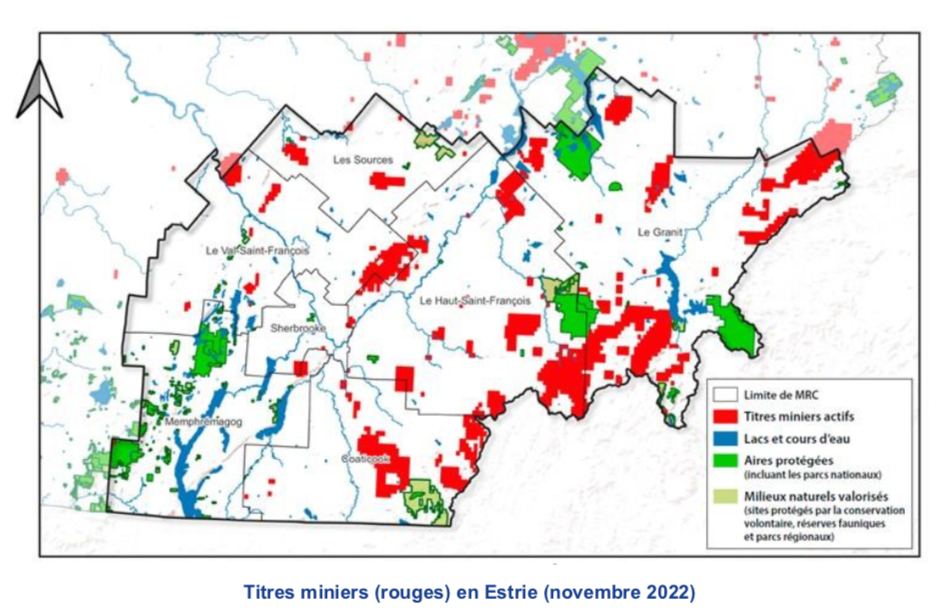 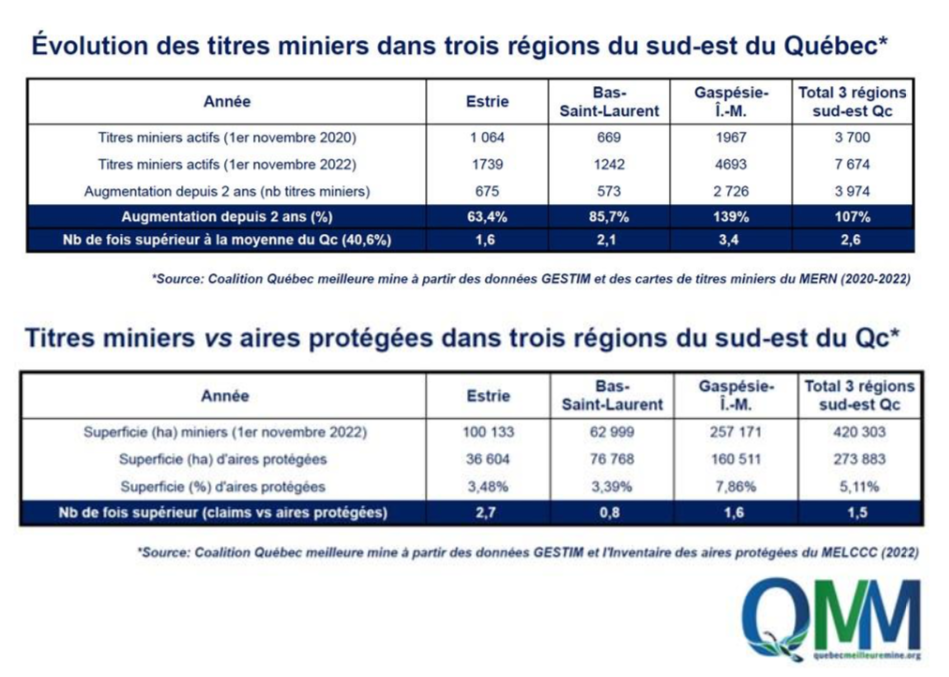