Grave Diggers: A Report on Mining in Burma

By Roger Moody: In the course of my research, several salient facts emerged. First, the number of mining companies invited into Burma by the military regime, the State Law and Order Restoration Council (SLORC), is greater than we previously suspected. In Chapter Three, more than sixty of these are listed. Second, despite a high-profile and persistent international campaign to bar all foreign investment in Burma, some major corporations, not just “juniors”, have invested in mineral exploration and exploitation. Third, the most important single operator in the country is a multi-millionaire, backed by several of the world’s biggest corporations, who owns critical stakes in other mines, not only in the Asia-Pacific but also in Africa. Fourth, despite the extreme difficulty, and dangers to “whistle blowers”, of gaining direct evidence of conditions at Burma’s mines, disturbing accounts of pollution, the use of forced labour, and violations of human rights, have emerged. Lastly, the laws under which miners operate under the regime appear lax or ambiguous, and provide virtually no protection to the communities most affected. 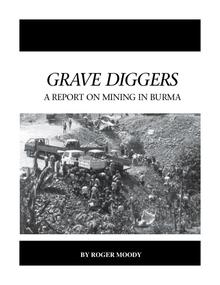 Grave Diggers: A Report on Mining in Burma