Looking Beneath the Surface: An Assessment of the Value of Public Support for the Metal Mining Industry in Canada

The cost to federal taxpayers for the care and feeding of the metal mining industry has increased to $383 million a year, while the industry is delivering in return fewer jobs and reduced economic activity, according to a new report released today by MiningWatch Canada and the Pembina Institute.

"The richest vein of gold the Canadian mining industry has ever tapped was the one they discovered in the taxpayer's arm," said Joan Kuyek, National Co-ordinator of MiningWatch Canada.

"Looking Beneath the Surface" quantifies both the public costs to support the metal mining industry and the benefits generated by the industry in fiscal years 1994-95 and 2000-01.

"The federal government's tax breaks and public spending on the mining industry are wildly out of proportion to its declining economic importance," said Ms. Kuyek. "The incredible level of subsidies practically makes mining industry workers federal employees," she said.

Special tax breaks from the Government of Canada totaled nearly $319 million in fiscal year 2000-01, up 5% from 1994-95. The special deals for the mining industry included the Investment Tax Credit for Exploration, Resource Allowance, Canadian Development Expenses, Canadian Exploration Expense. Spending on programs for the benefit of the mining industry totaled $64 million annually.

Economic benefits from the mining industry are decreasing.

"The adverse social and environmental impacts of mining development are well known. Our report found that the metal mining industry is in decline as a generator of jobs and economic development. The projected lifetime of new mines is getting shorter, so what economic development they deliver is becoming more transitory. The industry appears to be addicted to constantly larger transfusions of public cash and tax breaks for every job it provides," Ms. Kuyek said.

The federal government spent more than $14 million on closure, remediation and long-term care of privately owned mines in 2000-2001, compared to no such costs in 1994-95. Potential federal treasury liability for cleaning up closed or abandoned mines totals nearly $640 million.

"As highlighted in the Environmental Commissioner's report last week, the taxpayer can be on the hook for cleanup costs whenever a mining company runs out of ore or goes bankrupt," said Ms. Kuyek.

"The pattern of federal expenditures reflects a deeply embedded focus on supporting the non-renewable resource extraction economy of Canada's past. As the Organization for Economic Cooperation and Development and others have pointed out, the continued subsidization of the sector cannot be supported on either economic or environmental grounds. The treatment of the mining industry needs to be brought into line with that of other sectors of the economy," said Dr. Mark Winfield of the Pembina Institute, and lead author of the report.

Total annual spending on the mining industry by the federal government and the governments of British Columbia, Ontario, Quebec and the Yukon Territory was nearly $600 million in 2000-01, and is continuing to increase, particularly in B.C. and Quebec.

"The Government of Canada needs to focus on making investment in forms of development that will be environmentally, socially and economically sustainable over the long term," Dr. Winfield concluded. 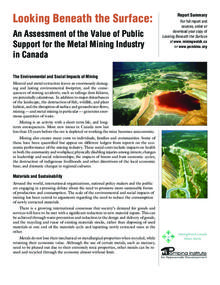 Looking Beneath the Surface - Summary 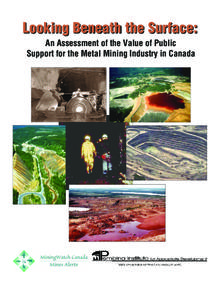 Looking Beneath the Surface: An Assessment of the Value of Public Support for the Metal Mining Industry in Canada