CIDA has been given a new mandate to support Corporate Social Responsibility (CSR) projects of mining companies with Canadian tax dollars through Official Development Assistance. This needs to be examined in the context of an expanding research that details the ways in which large-scale mining3 itself creates very serious and long-lasting development deficits, both at national and at local levels in many developing countries.

Increasing local level conflict at mine sites around the world, and the growing severity of these conflicts, is most often related to struggles by poor people to protect the natural resources and the agricultural practices that sustain them from destruction by mining, often at great cost to themselves.

The Committee's report, Driving Inclusive Economic Growth: The Role of the Private Sector in International Development, was adopted October 30, 2012. It is available on the Committee's web page, along with transcripts of witnesses' testimony, and the government's response. 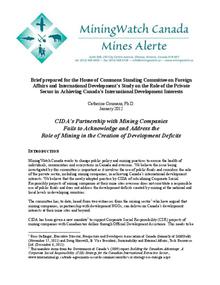