Corruption, Murder and Canadian Mining in Mexico: The Case of Blackfire Exploration and the Canadian Embassy

Documents released from the Canadian Department of Foreign Affairs and International Trade (DFAIT) under an access to information request raise serious concerns about the conduct of the Canadian Embassy in Mexico. Throughout a conflict involving Blackfire Exploration’s mining activities in the municipality of Chicomuselo, Chiapas that saw an activist shot and ultimately triggered an RCMP investigation over corruption, it appears the Embassy provided instrumental and unconscionable support to the operations of a Canadian mining company in Mexico.

Overall, the released documents suggest that in the case of Blackfire, the Embassy provided virtually unconditional support in spite of the company’s behaviour and the Embassy’s awareness of the tensions around the mine site. The documents also establish that Mariano Abarca was known to the Embassy before he was murdered. In July 2009, Mariano delivered a speech outside the Embassy in Mexico City, and in August 2009 the Embassy reported receiving 1,400 letters about Abarca following his arrest and detention based on a complaint filed by a Blackfire representative in Mexico. Even after Abarca had been killed, the mine had been suspended, and corruption allegations had surfaced, the Embassy continued to defend the company to Mexican state officials and provided it with information on how to sue the state of Chiapas under the North American Free Trade Agreement (NAFTA) for closing the mine.

An analysis of the DFAIT documents and ancillary materials supports the following conclusions. First, the Embassy’s active and unquestioning support may have acted as a disincentive for Blackfire to comply with local and international laws. Second, in doing so, the Embassy failed to uphold Canada’s own policies, as well as its international obligation to promote universal respect for human rights. 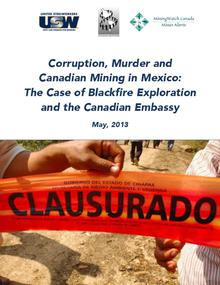 Corruption, Murder and Canadian Mining in Mexico: The Case of Blackfire Exploration and the Canadian Embassy 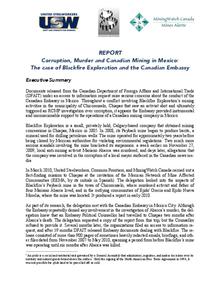