In the National Interest? Criminalization of Land and Environment Defenders in the Americas

Highlights from ‘In the National Interest?’

Here in Canada and throughout the Americas, many governments have embraced resource extraction as the key sector to fuel economic growth, neglecting other sectors – or even at their expense. This is creating unprecedented demand for land and other resources, such as water and energy. In Latin America, economic dependency on intensive primary resource extraction has become known as ‘extractivism’.

Increasingly, when Indigenous and Afro-descendent peoples, farmers, environmentalists, journalists, and other concerned citizens speak out against this model for economic growth, particular projects and/or their impacts, they become the targets of threats, accusations, and smears that attempt to label and punish them as enemies of the state, opponents of development, delinquents, criminals, and terrorists. In the worst cases, this leads to physical violence and murder.

Guatemala, Peru, and Mexico provide examples of intensified criminalization, where there has been little pause in neoliberal deregulation of the mining sector since the 1990s.

In Guatemala, where Canadian firms have dominated the mining sector and consistently enjoyed public support from the Canadian Embassy despite serious impacts in affected communities, criminalization of mining-affected communities has intensified under the scandal-ridden administration of (now former) President Otto Pérez Molina. Some ninety people were targeted for their involvement in efforts to organize local plebiscites on mining, or for participating in peaceful protests against Tahoe Resources’ Escobal silver mine, including several who endured months in jail. In this case, criminalization has led to violence and militarization, including a state-led pilot project at the local level, led by a military colonel, which frames local organising as a threat to national security.

In Peru, Canada has spent tens of millions of dollars in overseas development aid since the 1990s on projects that reinforce a role for the state as either absent or servile to corporate interests and highly reliant on short-term mining rents. As the number of mining conflicts has soared, parallel legislative changes have stiffened penalties for social protest and given police greater impunity to use lethal violence against protestors. From 2006 to 2014, 230 people were killed and 3,318 wounded in socio-environmental conflicts, principally around mining projects. State armed forces, which may even be directly employed by mining companies, are frequently the aggressors. As of mid-2014, some 400 people were facing legal persecution under generally spurious accusations made by companies, company staff, or public prosecutors, including for rebellion, terrorism, and violence.

Mexico, the country of choice for Canadian mining investment abroad since the signing of the North American Free Trade Agreement (NAFTA), is one of the deadliest countries in which to defend land and the environment, where criminalization can easily lead to murder. Perpetrators of frequent murders are almost never held to account and militarization has increased along with growing territorial control of criminal groups, along with a frightening escalation of the use of torture, of particular risk for anyone who is jailed.

The criminalization and murder of community leader Mariano Abarca in 2009 in connection with Blackfire Exploration’s “Payback” mine in Chiapas illustrates how the Canadian government’s idea of ‘economic diplomacy’ may contribute to or fail to address repression and violence. The Canadian Embassy in Mexico knew of tensions around Blackfire’s mine; Abarca himself had told the Embassy about armed workers being used to intimidate peaceful protesters. When Abarca was detained, mere weeks after speaking about this with the Embassy, the Embassy received some 1,400 letters expressing dire concern for Abarca’s life. Nonetheless, the Embassy’s response was oriented to dispelling doubts over the legitimacy of Blackfire’s operation. Three months later, Mariano was murdered. All of the suspects in his killing were connected to the company, and justice has still not been served. The Embassy has denied any responsibility and argued that to show support for community leaders who are criminalized would be to interfere in Mexican sovereignty; revealingly, it does not harbour the same reservations about lobbying Mexican officials and agencies on behalf of Canadian companies.

In Ecuador, the role of the Canadian lobby to contain mining law reforms – and continued state dependency on the extractivist economic model – have contributed to a new wave of criminalization despite significant efforts in recent years to ensure greater protection for people and the environment.

The Canadian Embassy lobbied hard against application of a constitutional decree passed in 2008 that should have revoked most of the mining concessions in the country for lack of prior consultation with communities and overlap with water supplies and other sensitive areas. The Embassy also ensured a privileged seat for Canadian companies in the development of the new mining law in 2009, which coincidentally failed to incorporate the standards set by the constitutional decree. After the new law was approved, Canadian companies still pressured to have it weakened. Meanwhile, the law was turned against communities that have long been opposed to large-scale extractive industry developments because of their impacts on water supplies, forests, and local economies and cultures. Community leaders have been criminalized on charges of terrorism, often with arbitrary detention and preventative prison sentences, and they further face public smear campaigns, including by government officials, that seek to delegitimize their claims.

Canada provides the final example, riding its own wave of deregulation, dependency, and devolution into a state increasingly intolerant of growing public dissent over extractivism. Over the last decade, Canadian Security Intelligence Service (CSIS) and Royal Canadian Mounted Police (RCMP) security reports, along with government policy documents — notably on anti-terrorism strategies — have equated economic interests with Canada’s “national interests” and designated groups opposed to these interests as a threat to Canada’s national security. Groups challenging government policy, particularly surrounding the energy and extractive sectors, have been infiltrated and subject to surveillance by both CSIS and the RCMP. The recent passage of the Anti-Terrorism Act, Bill C-51, raises further concerns about enhanced powers for Canadian intelligence agencies, among other provisions, being used against Indigenous groups and other organizations contesting the government’s extractivist agenda.

In summary, the report observes that it is becoming ever more dangerous and difficult for affected communities and organizations who are fighting for Indigenous rights, self-determination and environmental justice in the Americas to speak out and do their work. As this situation worsens, the Canadian government has increasingly dedicated its diplomatic services, aid budget, and trade and investment policy to promote and favour the interests of Canadian mining companies and to influence decisions over extractive projects and related policies. The trend of repression and deregulation in Canada to favour mining, oil, and gas projects is consistent with the model that the Canadian government promotes abroad.

Concluding with a series of ideas and recommendations for discussion, the report seeks to spur debate and foster creative action to defend dissent in defence of land and the environment, and to question Canada’s role in promoting the underlying economic development model that is putting communities at such a deadly disadvantage.

Download a summary of the report in English or French. 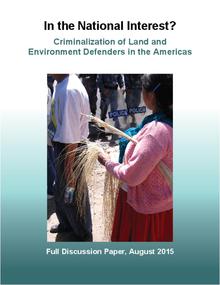 In the National Interest? Criminalization of Land and Environment Defenders in the Americas 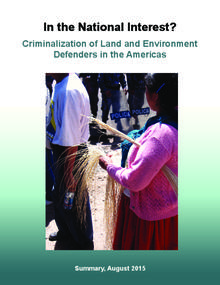 English summary: "In the National Interest?" 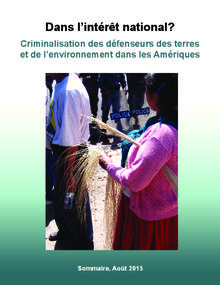