Background to this statement

On May 16, 2018, MiningWatch Canada and OECD Watch issued a media release to draw attention to an attempt by the Government of Canada to cover up its mishandling of a complaint through Canada’s National Contact Point (NCP) for the OECD Guidelines for Multinational Enterprises. The Request for Review in question, titled “Complaint against the Sakto Group, Ottawa” was filed with Canada’s NCP in January 2016 by the not-for-profit Bruno Manser Fonds (BMF) of Switzerland. The complaint alleges that the Sakto Group, with corporations headquartered in Ottawa, breached disclosure requirements of the OECD Guidelines for Multinational Enterprises, a guide to responsible business conduct that is binding on Canada and other members of the OECD.

It is not, and has never been, our intention to express an opinion on the issues BMF raised with the NCP in regard to the Sakto Group, but rather to shed light on the failure of the NCP to follow OECD procedural guidance on the handling of such cases, and its failure to be transparent regarding its reasons for deviating from established practice in this case. Following our release of May 16, 2018, MiningWatch and OECD Watch received letters from legal counsel for Sakto Corp. complaining of the release. We are replacing our brief May 16, 2018, press release with this more detailed statement regarding the mishandling by the NCP of the case brought by the BMF. 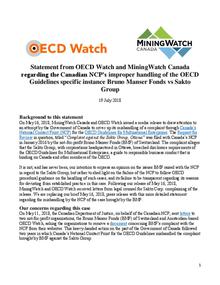