The Quebrada Blanca Phase II (QBP2) Expansion Project will require more than 4.7 billion dollars in capital investment and is financed by Japanese and Canadian  banks and finance corporations.

The expansion project is an open-pit copper-molybdenum-silver mine which contemplates a life-of mine of over 25 years, with a capacity of 140,000 tonnes per day (tpd). Following construction the mine will be one of the largest mines in Chile and among the 20 largest mines in the world. It is being erected atop of the existing pit in the Tarapacá region – an area of Chile that is already saturated with large-scale mines.

Since groundwater resources cannot satisfy the needs of the expansion – due to overuse by the mine’s existing operations – QBP2 will include building a seawater desalination plant in Patache Bay, using aqueducts to transport the water 159 km from the sea, climbing 4400 m in altitude to the mine site. 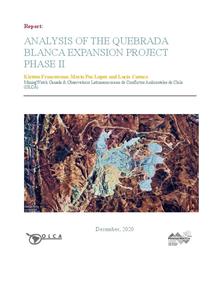