This report analyzes the Marathon Project with specific reference to the market prospects for palladium in the medium term. The analysis suggests that the Project entails far greater economic risk than Generation PGM’s promotional material allows. In particular, the report draws attention to the following areas of concern:

The analysis begins with an overview of global palladium production, reserves, as well as its various end uses before highlighting in greater detail each of the areas of concern noted above. 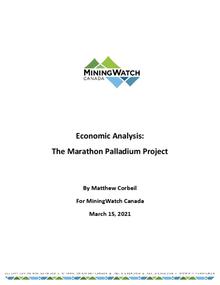