From Mexico to Greece, we have been observing and documenting how Canadian Embassies go to bat to defend the interests of Canadian mining companies against the demands of communities and despite egregious human rights abuses.

In May, we released a report with Common Frontiers and the United Steelworkers based on our analysis of hundreds of pages of documents obtained through an access to information request to the Department of Foreign Affairs. Our research reveals how the Canadian Embassy in Mexico put considerable public resources at the service of Calgary-based Blackfire Exploration despite connections with suspects in the murder of a local activist, mine suspension on environmental grounds, and widely reported allegations of corruption.

Most disturbingly, we found that mere days after a damning report was circulated to the highest echelons of the Canadian government regarding the company’s behaviour in Chiapas, Canadian authorities sought advice for the company about how to sue the state of Chiapas under the North American Free Trade Agreement (NAFTA) for having closed the mine.

On November 27, 2009, Mariano Abarca was murdered in front of the restaurant that he owned and operated in the town of Chicomuselo, Chiapas. Abarca was a father of four and an active citizen who had fought for lower electricity rates. At the time he was murdered, he was leading a fight against Blackfire’s barite mine given concerns over social and environmental impacts. 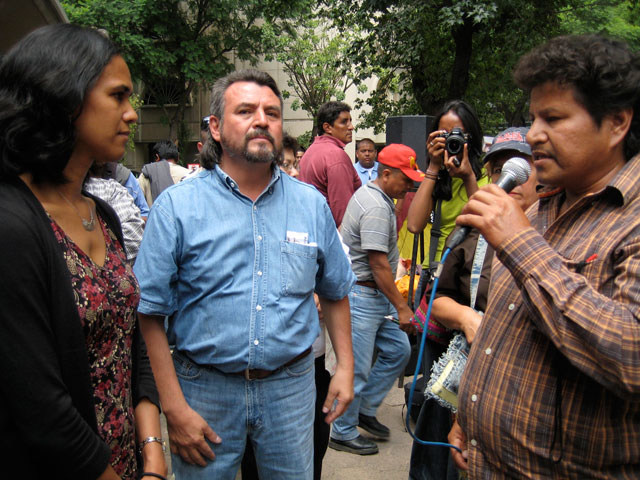 One week after his murder, Chiapas environmental authorities suspended the mine. Days later, the Globe and Mail reported that Blackfire had been making payments into the personal bank account of the mayor of Chicomuselo. An RCMP investigation into the allegations is ongoing.

We were aghast to learn that a few months before Abarca’s murder, when he was arrested for eight days based on trumped up accusations made by the company, the Embassy’s response received 1,400 letters expressing dire concern for Abarca’s life. Abarca had also just complained to an Embassy official that Blackfire workers were armed and intimidating mine opponents. Nonetheless, when Embassy officials visited Chiapas around this time, they appear only to have inquired about the security of Blackfire’s investment, disregarding what communities were facing.

This is particularly disturbing in the context of a country such as Mexico, where Canadian companies comprise some 204 of 269 foreign firms operating in the sector and where, during 2012, we have seen some four mining opponents killed and others threatened, as well as ecologically, culturally and historically important sites put at risk from mining projects. It highlights how the one-sided and apparently unconditional support of Canadian officials as a serious part of the problem and why Canadian Embassies are becoming viewed as representatives of Canadian mining companies.

Certainly, the Mayor of Alexandroupolis, Greece would have felt this way when in March, 2012, Canadian Ambassador Robert Peck requested a meeting – partly captured on video – to pressure him into accepting Eldorado Gold’s open-pit gold mine project that has been vociferously opposed by the local population given threats to the environment and more sustainable livelihood activities.

Similarly, the Governor of the state of Morelos, Mexico, had the same impression when Canadian Ambassador Sara Hradecky intervened in favour of Esperanza Resources whose gold and silver open-pit mine project has been hotly contested, including by state and federal environmental authorities, for being situated a mere kilometre from the popular archaeological site Xochicalco.

Residents of the municipality of San Rafael Las Flores, in southeast Guatemala also shared this perception when Canadian Ambassador Hughes Rousseau participated as a witness of honour in the signing of a pact between the Guatemalan government and Tahoe Resources to voluntarily raise royalty payments from 1 to 5% upon putting the company’s Escobal silver mine into production. The pact is aimed at trying to legitimize an unwanted project. So far, twelve plebiscites have taken place at the community and municipal level in southeastern Guatemala, in the area of Tahoe’s silver project in which local residents have voted overwhelmingly against the project. The current insistence to press forward regardless of local opposition with this project is contributing to an increasingly volatile situation. Two days before Rousseau participated in the official act, six men were shot by private security at the Escobal silver mine as they walked past the company’s property, and one policeman killed. Three days after the royalties pact was signed, the Guatemalan government declared a state of siege in the area of Tahoe’s silver project, suspending civil rights, including the right to protest or to public gatherings, and permitting police to conduct raids and detain people without warrant.

This trend reinforces the urgent need to reign in Canadian government promotion for our overseas mining sector, such that Canada create robust eligibility criteria for all government supports to mining companies, including ensuring respect for the free, prior, and informed consent of Indigenous communities and for binding democratic and participatory decision-making processes of non-Indigenous communities before mine prospecting and project development begins; and pass legislation to regulate Canadian mining companies operating abroad, ensuring affected communities recourse to Canadian courts and an independent ombudsperson.