MiningWatch expresses growing concern for the “State of Exception” (State of Emergency) declared by Ecuadorian president Lenin Moreno on October 3rd which seeks to grant exceptional powers to the police and military forces to repress Indigenous and civil society mobilizations against the so-called “paquetazo” (package) of austerity measures. The elimination of government subsidies to gasoline and diesel last week was the last straw in a series of economic austerity measures which seek to “open” Ecuador to foreign investment as mandated by the International Monetary Fund, the Interamerican Development Bank, and other international lenders that have been re-negotiating Ecuador’s substantial foreign debt.

As groups like Comunanalysis denounced earlier today (statement attached), the government has been pressured by international lenders and financing institutions to sign the 2019 agreement with the IMF which privileges foreign investment as a way of providing collateral for the billion-dollar loans. By demonstrating that they have “strategic mining projects” which will generate foreign currency, the government has been able to renegotiate the debt.

Ecuadorian officials were also counselled by the IMF to modify the tax regime applicable to the mining sector in order to eliminate “investment disincentives” actions which have been applauded by the IMF and mining companies alike.

Communities are caught at the front line defending their territories against the threat posed by mining extraction in their territories, an assault which has the full support of the national government, international lending institutions and financing banks, and foreign (primarily Canadian, although also Australian and Chinese) mining companies.

According to MiningWatch Canada’s database, in 2019 there were 12 Canadian-based mining companies with over 40 mining projects in the country. Among them are projects which have been called “strategic” and thus have been incorporated into anticipated revenues to go towards paying off the foreign debt, like INV Metals’ heartily opposed Loma Larga project in Azuay Province, and Lundin Mining’s Fruta del Norte project in Zamora Chinchipe Province.

It is also important to mention that the territories where strong resistance to Canadian mining companies has resurfaced in the last month are the same territories where the military has been sent to repress the current blockades. On August 17th the Constitutional Court ruled that despite claims from the Vice-Minister of Mines and the President, the central government cannot prevent nor override popular consultas or referenda on mining in territories affected by mining since they are guaranteed in the constitution. Although the court rejected the referendum question submitted by the anti-mining province of Azuay, it endorsed the ongoing struggle and opposition of communities affected by the Loma Larga project in the sensitive high moor (páramo) ecosystem.

On August 20th, an assembly in the province of Intag, attended by 2000 people, released a statement giving mining companies two months to withdraw completely from their communities. These declarations were directed at three companies, one of which is a Canadian company. Cornerstone Capital Resources has been trying to explore in the area through joint-venture agreements with the Ecuadorian state mining company ENAMI. Their activities have been the subject of criticism and opposition across the country.

On August 23rd, the Shuar Arutam Indigenous People’s government declared itself free of mining, demanding the exit of mining companies, the majority of whom are Canadian (Aurania Resources, Luminex Resources and Solaris Copper). On the same day that the “State of Exception” was declared and the military was attacking Shuar blockades, Aurania Resources announced it had gotten its drilling equipment into Shuar territory, commencing drilling this week.

Blockades are still holding strong around many of the major Canadian projects highlighted above, despite active and ongoing attempts by the police and military to gas, abuse, and arrest those involved in the protests. The Peoples Defense Office reports that nearly 500 people have been arrested, and of those many showed signs of abuse from the police and military.

The tension around mining projects is reaching a breaking point, as the recent burning of the Rio Blanco mining camp demonstrates. The Ecuadorian government and mining companies are inciting violence by refusing to take local opposition seriously. As an expression of frustration, communities are taking matters into their own hands.

The national indigenous organization CONAIE (statement attached), in response to the government’s declaration, declared its own state of emergency, calling on the police and military to retreat from Indigenous territories or face being “detained and subjected to Indigenous Justice.”

Canadian companies are attempting to use the government’s foreign debt discourse to justify their projects to investors, despite the human and ecological costs. But this does not reflect the reality on the ground and the undeniable and generalized resistance to mining activities in the country. As I write this, the Shuar Arutam are being gassed by the military at their blockades. The continued presence of Canadian companies in the area causes a real threat to the lives of communities and Indigenous peoples defending their territories from imminent socio-ecological disaster. 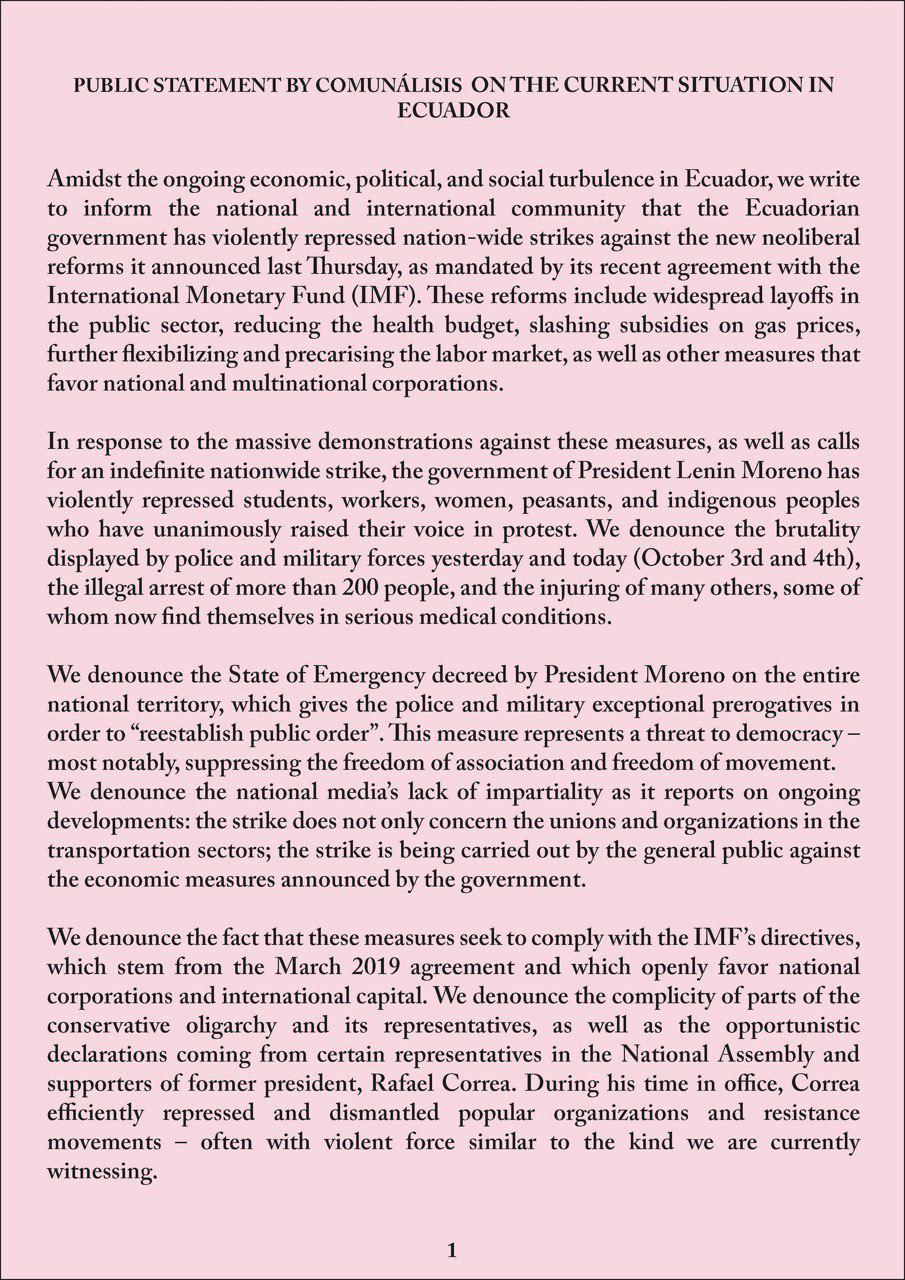 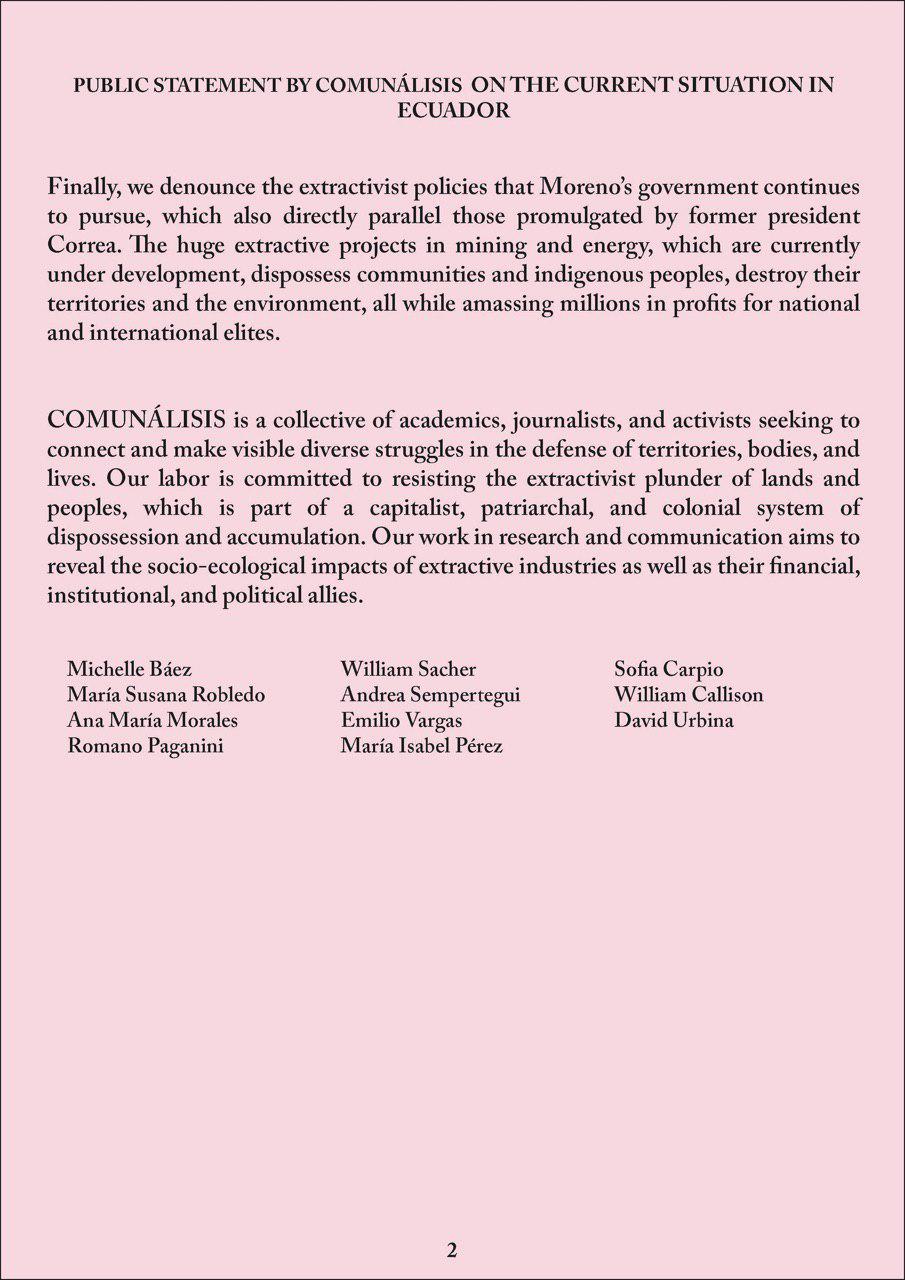 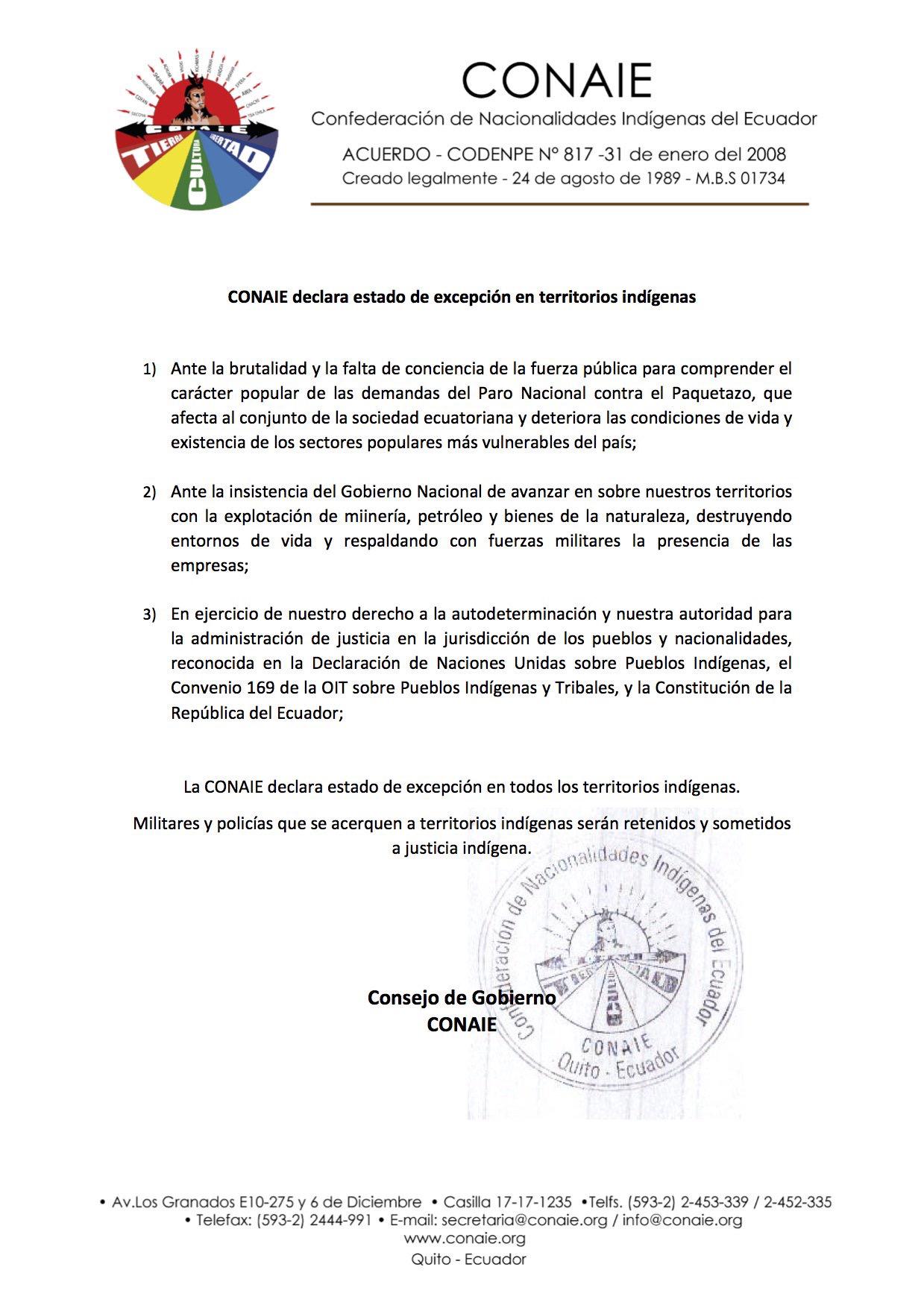