Unearthing Canadian Complicity: Excellon Resources, the Canadian Embassy and the Violation of Land and Labour Rights in Durango, Mexico

Documents obtained from the Canadian Department of Foreign Affairs, Trade and Development (DFATD) under an access to information request reveal the complicity of the Canadian Embassy in Mexico in Toronto-based Excellon Resources’ efforts to avoid addressing violations of its land-use contract with the agricultural community, Ejido La Sierrita, on whose land it operates the La Platosa mine in the state of Durango. This included Embassy tolerance of, and even support for, violent state repression against a peaceful protest during the summer of 2012.

Understanding the behaviour of the Canadian Embassy in Mexico is an important indicator of how Canadian missions operate abroad, given that Mexico is the principal destination for Canadian mining investment outside of Canada and frequent community and worker conflicts with Canadian mining companies. Insights into Embassy behaviour are also important now that the Canadian Government has declared “economic diplomacy” to be a central facet of its Global Markets Action Plan, indicating that its entire diplomatic corps is at the service of private interests.

Embassy correspondence and briefing notes obtained from DFATD pertain to the period from July to November 2012, during which time the Ejido La Sierrita peacefully demonstrated against Excellon’s silver, lead, and zinc mine after exhausting formal channels for their complaints in Canada and while continuing to call for dialogue with the company in Mexico. Two complaints brought to Canadian offices in 2011 and 2012 outlined company violations of land and labour rights. As a result, during the period under consideration in this report, Canadian officials in Ottawa and the Embassy in Mexico had considerable information about this conflict.

Review of the disclosed material leads to the following observations:

This study reinforces our concern that Canadian missions are promoting and protecting the interests of Canadian mining companies to the detriment of the individual and collective rights of communities and workers, shedding light on how the Canadian Government’s “economic diplomacy” policy could enable abuses.

The Embassy demonstrates a willingness to facilitate high-level relationships that led to the community’s property being sacked and their safety put at risk in order that the mine could continue operating, without ensuring that the company comply with contractual agreements, labour laws and human rights norms.

The Canadian state’s lack of accountability mechanisms to address abuses is glaring. The ineffectiveness of voluntary complaints mechanisms in Canada is part of the state of impunity in which mining companies are operating in Mexico and around the world, which lets companies get away with such behaviour, while communities and workers are left with few, if any, effective channels to have their grievances meaningfully addressed.

Perhaps even more troubling is the Embassy’s failure to demand even basic human rights protections for the community and workers when the Embassy knew that armed repression would be used to favour the company. This is unacceptable in the context of a country such as Mexico where state armed forces are implicated in outrageous levels of violence, including forced disappearances, torture, and murder.

Building on our analysis of the one-sided behaviour of the Canadian Embassy in Mexico, which we began with the examination of the role of the Embassy in the case of Blackfire Exploration in Chiapas from 2007-2010, this study further illustrates how the Canadian Government is a part of the problem with the Canadian overseas mining sector. Contrary to encouraging Canadian companies to be law-abiding and respectful, the Canadian Government is enabling and defending company operations to the economic advantage of a privileged few while the wellbeing of communities, workers and the environment is put in jeopardy. 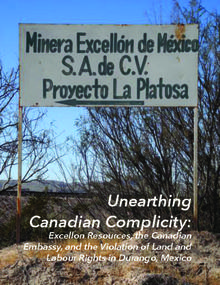 Unearthing Canadian Complicity: Excellon Resources, the Canadian Embassy and the Violation of Land and Labour Rights in Durango, Mexico